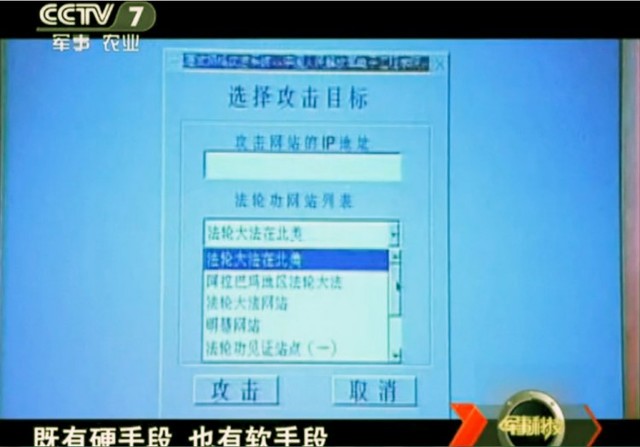 It has been widely believed that China has been behind many cyber attacks in the past but there was little evidence to support those claims. While the country has always refuted these remarks, an accidental leak reveals that they are engaging in cyber warfare and routing it through US IP addresses.

The information comes from thepochtimes.com and shows a screen cap from a video that clearly shows the software. The writing at the top of the box states “Select Attack Target” and the scroll windows allows the individual to select an IP address to attack from. The Chinese are using US based IP address to commit cyber warfare.

The software was built by the Electrical Engineering University of China's People's Liberation Army. In the video, the user selects the IP 138.26.72.17 which happens to belong to the University of Alabama in Birmingham. The source states:

The screenshots appear as B-roll footage in the documentary for six seconds—between 11:04 and 11:10 minutes—showing custom-built Chinese software apparently launching a cyber-attack against the main website of the Falun Gong spiritual practice, by using a compromised IP address belonging to a United States university.

This information surfaced in what was supposed to be a standard propaganda based military video that praised the Chinese and bashed the US.

It has been widely believed for some time that the Chinese were working on cyber warfare software, but this is the first direct evidence that they are using it against the United States. China has not commented on this leak.