Think of the CIA, and the first things that come to mind probably aren't especially flattering towards it. The Central Intelligence Agency has been at the centre of numerous controversies over the years - from extraordinary rendition to intelligence failures, and allegations of human rights violations.

But aside from these very legitimate concerns, a further part of why the CIA - and other similar agencies both in the US and other parts of the world - are perceived so negatively is, of course, down to their secretive nature, which leaves much to the imagination.

As part of its continuing efforts to improve how Americans, and those in other countries, see the CIA, the agency has now joined Twitter - and its first tweet was just about perfect:

We can neither confirm nor deny that this is our first tweet.

The tweet was enough to make even some of the CIA's critics crack a smile, and was widely retweeted and shared across the social network. It helped the agency to quickly grow its Twitter following, with almost 350,000 followers at time of publication.

The "we can neither confirm nor deny" comment has become more or less synonymous with the CIA over the years. Known as the 'Glomar response', its roots go back to 1975, when the CIA built a salvage ship, the Glomar Explorer, as part of its covert operation 'Project Azorian' to salvage a sunken Soviet submarine. You can learn more about this over at Radiolab.org. 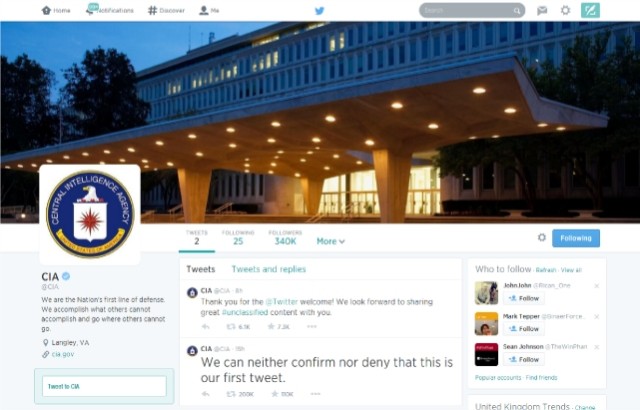 CIA director John Brennan said in a press release that its new efforts across social media - which also includes a new Facebook page - will allow the agency "to more directly engage with the public and provide information on CIA's mission, history and other developments." Followers will also be able to view images shared from the CIA Museum collection, which includes many items - including weapons, documents and spy equipment from the history of the CIA and its predecessor, the OSS - but which is not open to the public.

The CIA has already shared its second tweet, although it rather lacks the simple brilliance of its original effort:

Some may be wondering how the CIA was able to get the highly prized @CIA Twitter handle. According to the CIA's K Jordan Caldwell, speaking with BBC News, the handle was previously being used by "someone who was impersonating the agency", and was released to the CIA after a complaint was filed with Twitter.