Microsoft may have launched a new TV commercial that pits its Windows Phone OS directly against Apple's iPhone and Samsung's Galaxy products, but overall Windows Phone is still not making a ton of progress against iOS and Android devices in the US. 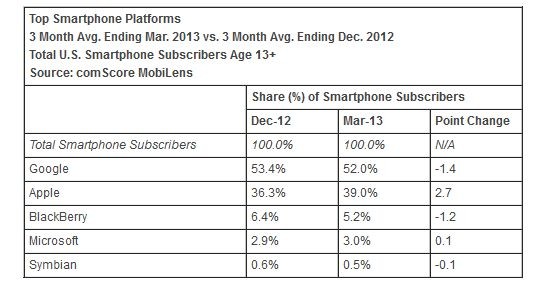 ComScore's latest survey numbers show that in the three month period that ended in March 2013, Microsoft's smartphone market share was only three percent in the US. That's a rise of just 0.1 percent compared to the three month period ending in December 2012. Google is still on top with 52 percent but saw its percentage drop by 1.4 percent in March compared to December.

Apple's market share in March was 39 percent, up 2.7 percent since December. Despite launching the new BlackBerry Z10 smartphone in March, BlackBerry's market share continues its slide. It's now at 5.2 percent, down 1.2 percent from December. Symbian is sixth with a tiny 0.5 percent of the market.

ComScore says that 136.7 million people in the U.S. currently own some kind of smartphone. Apple still is the single biggest smartphone maker in the US with 30 percent, followed by Samsung with 21.7 percent, HTC with 9.0 percent, Motorola with 8.5 percent and LG with 6.8 percent.