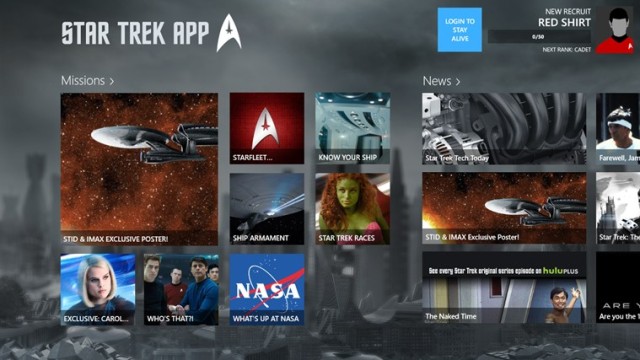 Earlier this week, Microsoft announced that the official Star Trek Into Darkness app for iOS and Android platforms had finally been released for Windows Phone owners. As it turns out, the movie promotional app has also quietly been launched for Windows 8 and Windows RT PCs as well.

The app, now available for free download in the Windows Store, makes good use of the Modern UI in terms of its design, with two sections. One is devoted to news about the upcoming movie directed by J.J. Abrams and the other showcase "missions" that can be completed by the user to raise their "Star Fleet" rank in the app.

Some of the missions include taking pictures of movie promotional images on websites and magazine, having your PC sound clicks from trailers and even episodes of the original Star Trek series, and more. Of course, there are contests that are involved, including winning movie merchandise and more. You can also pre-order tickets for the movie in the app via Fandango.

Star Trek Into Darkness is getting a lot of promotional help from Microsoft and third party partners, which includes a contest to win a meet-and-greet with some of the movie's cast at the LA Microsoft Store May 15th. Acer is also running TV commercials that promote the movie alongside its Windows 8 notebooks and tablets.