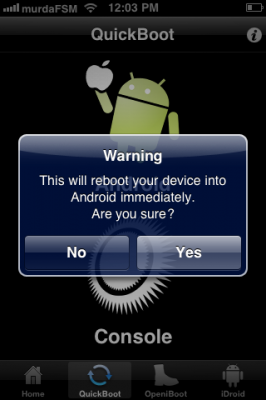 We've seen an iPhone running Android before, but never has the installation process been as simple as it is today. Enter Bootlace 2.1.

If you're currently sporting a jailbroken iPhone 2G or 3G, it's now easier than ever to test out Android without ever plugging your phone into a computer. Keep in mind, this is not a fully functional Android ROM. It's based off of Android 2.2.1, but still has many bugs to be worked out. Regarding compatibility, Funky Space Monkey notes that the following iOS versions are supported:

NOTE: If your device is not listed, it is not supported.

To achieve this hack, you can follow the step-by-step, setup guide from Funky Space Monkey. In short, the process consists of adding the "https://repo.neonkoala.co.uk" repo to Cydia, installing Bootlace 2.1, OpeniBoot, as well as iDroid, and then rebooting into iDroid (best to do all of this over Wi-Fi, as the files are rather large). This method will also allow you to receive iDroid updates as they're released.

It's possible that the project will, one day, allow for a fully functional version of Android for iPhone users. Until that day, enjoy having the option to run your OS of choice.