It's been tough times for the Windows Store over the past couple of months. While some companies and services including Adobe, Wells Fargo and FXNOW have embraced Microsoft's Universal Windows Platform, many others such as Rovio, Mint, Path, Amtrak and MyFitnessPal have dropped support for it altogether. Now, another big name can be added to the latter list as eBay has announced that it's killing off its Windows phone app as well. 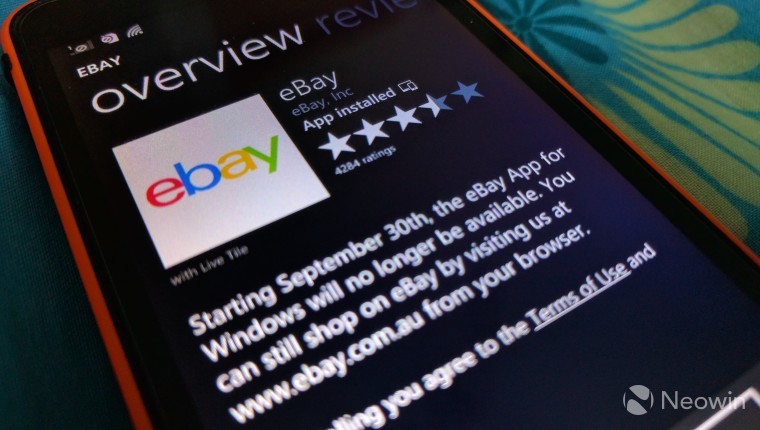 A message on the app's page in the Windows Store states that:

Starting September 30th, the eBay App for Windows will no longer be available. You can still shop on eBay by visiting us at www.ebay.com from your browser.

The screenshots section of the store page has an image with the same message.

eBay was released in the Windows Store as a Metro Windows 8 app back in July 2012 and has been updated quite a few times since then. Despite these updates, many have complained that the app needed a design refresh and is "simply terrible", although it still sports an average rating of 3.3/5 in the Windows Store.

eBay hasn't officially commented on why it removed the app and whether it plans to re-release it as a Universal Windows 10 app in the near future, but given the sudden end of support, this seems rather unlikely. With that being said, the application is still currently available for download in the Windows Store, but it's possible that it will be removed soon.