Today, Facebook rolled out an update to their platform which allows users to "@" reply to their friends, in a very similar fashion to that of Twitter.

Over the last year, Facebook has appeared to be trying to copy Twitter, the ridiculously fast growing social network service. Twitter allows users to post "status messages" that are 140 characters in length, and let others know what is on your mind, and Facebook is imitating this action more and more - mainly using the Twitter styled "stream".

Last year, Facebook even admitted it was having to change its model to be more "stream focused" as announced on their blog:

"As more and more information flows through Facebook, the need for people to easily discover the most recent and relevant content has grown. That's why when we redesigned the profile last year, we focused on the Wall—the stream of information telling you what is going on with a person—rather than the previous profile style of boxes containing unchanging information. This was a big step in our evolution because it moved Facebook in the direction of helping people share immediate experiences with one another: a thought, a status, a photo, a note, a feeling."

The new feature, which is called "tagging", is as easy as it is on Twitter. Just type the @username/full name and your friend(s) will be tagged in your status! The feature will help Facebook to give even deeper connections, especially when users want to say what they're doing at the moment when they're with friends.

If you're a Facebook user don't forget you can find Neowin on Facebook over at our Neowin page - facebook.com/neowin 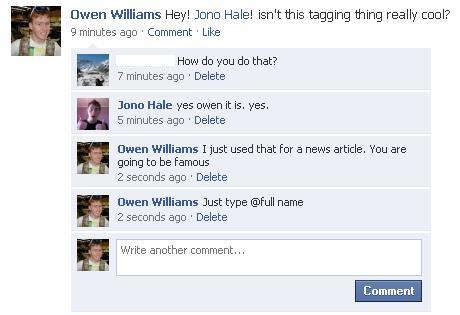