According to Bloomberg's ever-so-informative sources, Facebook is working with HTC to create a Facebook smartphone for a 2013 release. It will supposedly feature a variation on the Android OS, and will obviously feature very heavy Facebook integration with both the hardware and the software.

This isn't the first time Facebook was led down this road. The HTC ChaCha (shown below) was also an HTC phone that featured a Facebook hardware button that interfaced with the ubiquitous social network. The ChaCha didn't do very well. It's unclear why Facebook or HTC are trying this again. For starters, Facebook already has solid integration with the current batch of smartphone hardware. It's hard to justify spending money on a hardware interface that will add any more significant integration than what is already out there. When faced with buying a new phone, consumers don't have to worry about which social networks are compatible with the devices in front of them. Now, they'll have an option to buy a phone that locks them in (as far as functionality goes) to one service. It doesn't make a lot of sense. One wonders if Facebook could be spending this kind of money improving on the mobile apps they already have. And there's a lot of room for improvement. 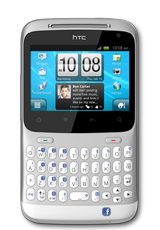 It's still unclear who's leading this partnership. If HTC wants to rein in Facebook because they think a Facebook-branded phone will sell, that would make sense if they were right. On the other hand, Facebook, which doesn't currently monetize its mobile apps in any real way, has no incentive to buy into a phone that features their service. Its not like the people this phone is targeted at won't be using Facebook on other devices.

This leads to an interesting possibility. Facebook could be using this phone, with its allegedly custom OS, to actually start monetizing their mobile. If they can find a way to seriously differentiate this experience from the experience that users already enjoy on other devices, Facebook could leverage their walled device by running ads in its software, bypassing the hurdles of sticking those ads in existing software. It's a long shot, but it's really the only thing that makes sense right now. Otherwise, there really is no winner in this partnership.