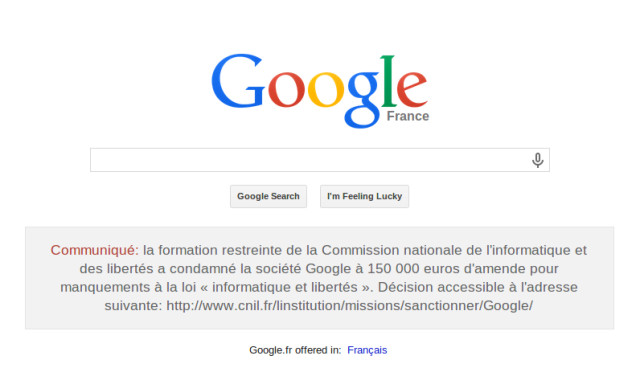 A regulatory body belonging to the French government has ordered Google to place a privacy warning on their French domain today as punishment for their violation of privacy laws.

Last month, Google faced a punishment handed down by the CNIL (an independent French regulatory body dealing with data privacy laws), including a fine of just over $200,000 and a condition that required the search engine to place a disclaimer on their French homepage warning citizens of the violation. Google initially appealed the ruling, but lost in court and had to post the admission of guilt.

According to reports, Google's violations included their failure to explain to users exactly what happened to their personal data after it was collected by the company, as well as the fact that the privacy policy didn't give users enough control over their information. The statement found on their French domain, when translated, reads:

The sanctions committee of the Commision Nationale de l’Informatique et des Libertés has ordered Google to pay a €150,000 fine for violations of the ‘Data-Processing and Freedoms’ law. Decision available at the following address: http:www.cnil.fr/linstitution/missions/sanctionner/Google/.

While Google has been heavily scrutinized in recent months for its privacy policies and apparent legal violations (including a recent EU antitrust issue), the company is still making some attempts to appear on the up-and-up in the public eye, such as their recent announcement of the Chromebox, a device targeted towards enterprises in need of video conferencing, as well as some minor social activism for the Sochi Olympics. But Google hasn't lost out on their chance to play damage control with its French audience yet, as they are still eligible to appeal the fine and the court's decision.