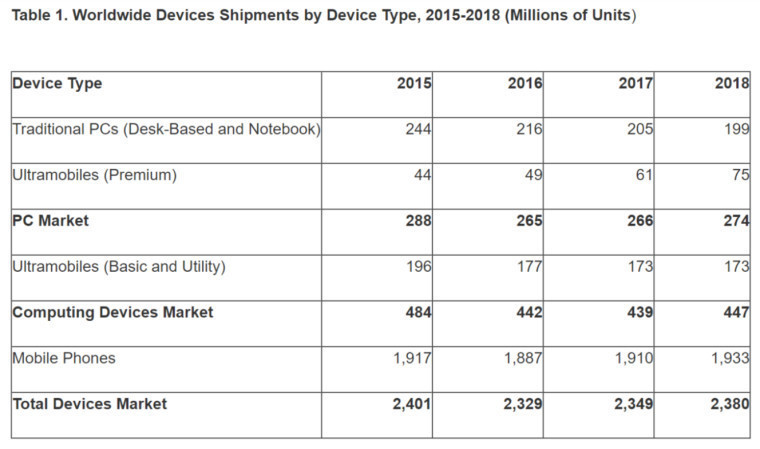 Gartner's annual report on worldwide device shipments predicts a 3 percent overall decline. This analysis is consistent with last year’s trend, in which shipments fell by 0.75 percent. According to the same report, mobile phone shipments are projected to fall 1.6 percent in 2016 as well.

Roberta Cozza, research director at Gartner, explained, “This is no surprise; the smartphone market is maturing, and reaching global saturation with phones that are increasingly capable and remain good enough for longer."

The market is poised to grow again in 2017, in part due to the release of a new iPhone that Cozza believes will “offer a new design and new features that are attractive enough to convince more replacement buyers.”

Likewise, the PC market is expected to continue to decline, with an 8 percent decrease in shipments from 288 to 265 million units. This decline is nothing new, as reports from both the second and third fiscal quarter of 2016 show consistent patterns.

Ranjit Atwal, research director at Gartner, states that "more affordable hardware and increasingly available virtual reality content (such as games, stories and other entertainment) will enable consumer PC buyers to upgrade in order to experience immersive offerings,” and help the market remain flat in 2017.

The only category projected to grow at all in 2016 are premium ultramobiles, which include Microsoft's Intel x86 devices and Apple's MacBook Air. The shipment of these devices is projected to grow from 46 million to 75 million units by 2018. International Data Corporation (IDC) claimed that the detachable tablet market would be leading the charge, after a 190 percent growth rate earlier this year.

However, shipments of basic ultramobile devices such as the iPad and Samsung's Galaxy Tab 2, show declining trends. This is also mostly consistent with IDC's predictions, which project the market to grow only starting in 2018.