Although the closing of Google Reader sent shockwaves through the Internet, it looks like closing down the RSS reader has allowed the company to focus on an even cooler technology. And unlike the shutdown of YouTube, we're sure this one just HAS to be real.

The latest search utility in Google's arsenal is called Google Nose, and it allows users to actually find out what things smell like. According to the site, Google's Street Sense vehicles (similar to the vehicle that maps out Street View) have "inhaled and indexed millions of atmospheric miles." This allows users to search for things like "horse manure" or "garlic," hold their phone up to their nose, and see what it smells like. 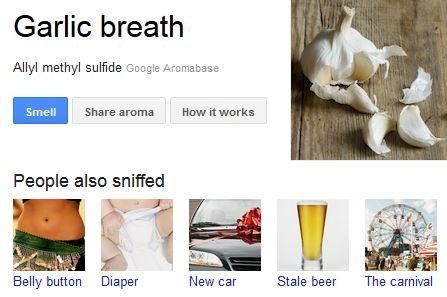 The site is currently live and, although we're a bit concerned that people want to know what a belly button smells like, this new offering is bound to change the way people use the Internet forever. Although apparently only available on Android, there's no mention of what phones are supported but we're sure that information will be released soon.