Google is reportedly testing a new feature which would allow users to sign into Google applications with more than one Google account at a time - something not currently officially available, although messy workarounds do exist.

Currently Google users have to log out and re-login again if they wish to use another Google account, but this new feature -- currently being tested with a limited number of Google users and first spotted by an unofficial Google fan blog, Google Operating System -- could prove a welcome relief for those with more than one account, reportedly allowing users to sign in with multiple Google accounts on a limited range of Google services, including Gmail, Google Calendar, Google Reader, Google Docs, Google Sites and Google Code. 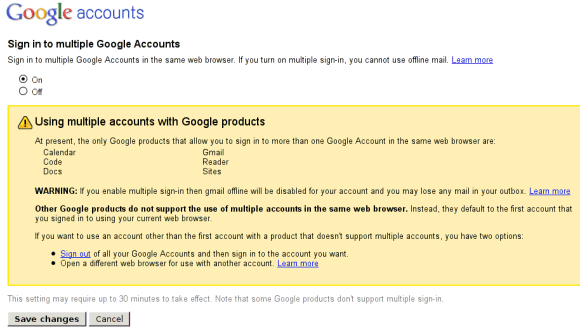 A Google spokesperson told GigaOm the feature will be rolling out to everyone "soon", with "many customers" currently testing the feature and providing Google with feedback.

“Back in May we announced that we will be rolling out changes to our infrastructure for Google Apps accounts, giving Google Apps users access to many more services," a Google spokesperson told GigaOm.

"We’re currently testing this feature with many customers to get feedback on the user experience. We look forward to bringing this big improvement to the rest of our customers soon, but we have nothing further to announce at this time."

Google Operating System notes those with the new multiple account support can visit their Google accounts page to setup the tool, although also says Gmail isn't supported when offline mode is enabled.