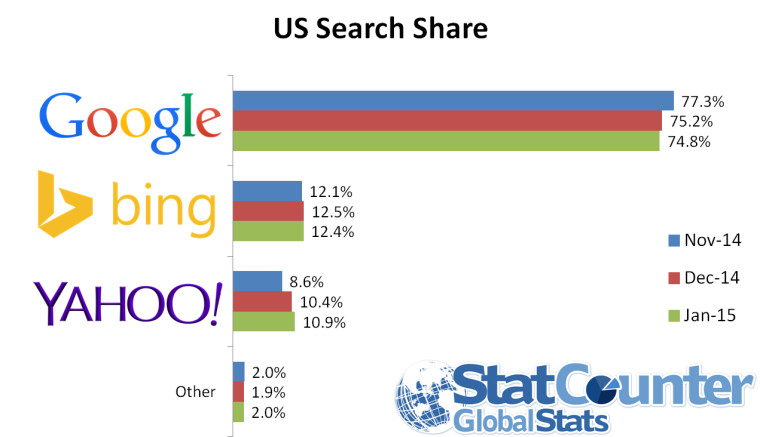 When Mozilla announced that they would be dropping Google as the default search provider for Firefox and would be switching to Yahoo!, all eyes turned to Google to see how this would impact their usage and more importantly, impact their bottom line.

Now that the transition to Yahoo! has been underway for Firefox users for two months, we can now begin to see the impact it is having on Google thanks to statistics from StatCounter. The site, which measures search usage-share in the US, is reporting that for the first time since 2008, Google's search market share is below 75%.

The data, which you can see at the top of this post, shows Google's decline over a three-month period while Bing remained mostly flat but Yahoo! has grown significantly.

For Google, this is represents a big concern as that company generates a significant portion of its revenue from displaying advertisements from searching. By Yahoo! now eating Google's lunch when it comes to searches, will result in less advertisements viewed for Google, which translates into less revenue.

Seeing that Bing is powering Yahoo!'s search, this is also a win for Microsoft, as they are able to extract the meta-data from additional searches to improve their engine.

We will be curious to see how long this trend continues, as many expected Firefox users to switch the search preferences after the change was implemented, or they would drop Firefox and use Chrome. But, seeing that does not seem to be the case, at least in the short term, only time will tell how much more Google's search share will drop now that Firefox is using Yahoo!.