We can't be kids forever, eventually we have to grow up, get jobs, and be adults, but I dare say that there remains an inner child in all of us. Though we may outgrow toys that we had as children, at the same time we still want to have fun - teenagers and adults still like toys, we just want bigger and badder ones, especially ones that fly.

Of course I'm talking about Unmanned Aerial Systems (UAS), more commonly known as quadcopters or drones. The market for these hobby crafts has seen huge growth within the past couple of years. There are tons of players, from well known established companies like DJI and Parrot, as well as newcomers like Hexo and Yuneec. Today, we are taking a look and flight with the newest quadcopter from Parrot, the Bebop 2.

Not much has changed from the original Bebop to the second generation. It still takes on the unique body style with a 180 degree fisheye camera built right into the nose of the craft. The body material has changed slightly, with the top shell now entirely plastic, while the previous version opted for a lightweight foam design.

With the propellers detached, the Bebop 2 is small enough to fit inside a backpack. The battery is removable and will allow for approximately 25 minutes of flying, more than double the 11 minutes you could squeeze out of the first generation. While this is above the average, most will still want a second battery to extend their flying sessions, as it takes a good hour to fully charge. The camera is a 14 MP CMOS sensor which is capable of snapping RAW, JPG, and DNG photos as well as recording 1080p video at 30 fps.

Unfortunately, this is the same camera as the old Bebop, and it's starting to look dated when many drones are getting 4k capable ones. As you will see from the flight footage, there is some obvious tearing in the video, which I attribute to the combination of a low video frame rate and the relative high speed of the drone. It stores the video and pictures within the drone's internal 8GB flash memory, which can later be downloaded via the app or a micro-USB cable plugged into the back.

As far as flying the Bebop 2, you have a couple choices. First (and most likely), you will download Parrot's FreeFlight 3 application, available for iOS, Android, and Windows 10 (both PC and phones). From the app you can setup a flight plan - which is exactly what it sounds like - tracing a path on a map, setting up the drone, and letting it go automatically. It's intuitive and simple, but you'll probably want to start off by flying manually. If you choose to fly manually, the app provides several different control styles, ranging from beginner to advanced.

Within the app you can also tweak settings like max vertical speed, max body angle, and max altitude. Utilizing your phone, you can get up to 300 meters range, but in reality you will only get this in an open field. Flying it around trees and buildings, especially where other wireless networks are present, you can expect around 100 meters. The WiFi antennas in the drone use MIMO technology, which help facilitate drone control and maneuvering, while simultaneously providing near-real time video from the craft. While the video is nice, the latency is unfortunately just high enough to make me feel uneasy flying using only what the camera is showing me. 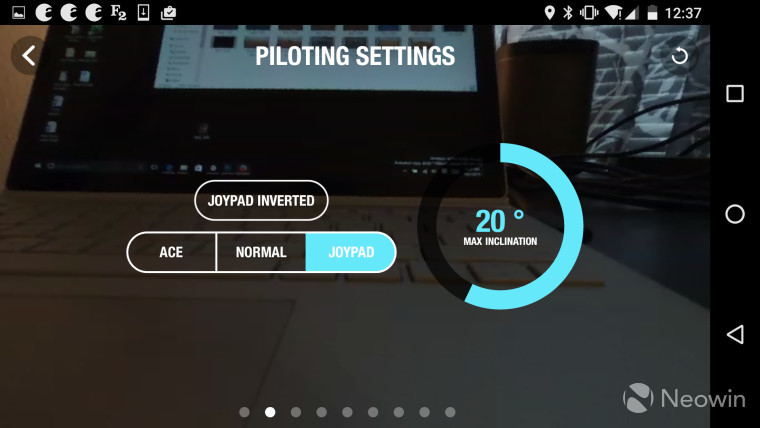 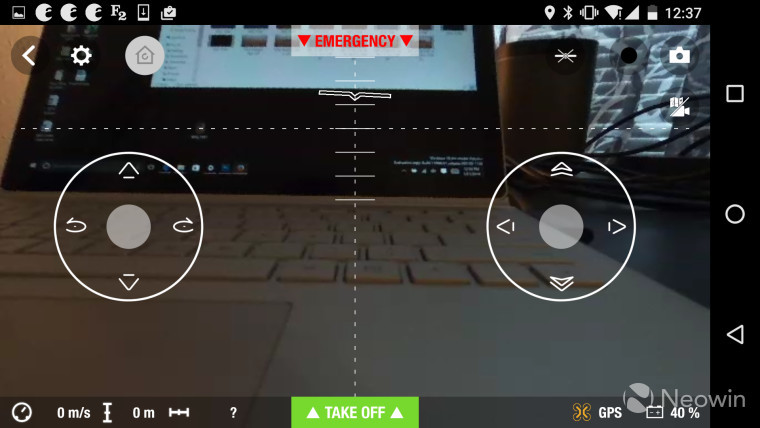 Though the app is very powerful, if you want to turn this quad copter into more than just a toy, you can get a physical controller geared towards more advanced users, which Parrot calls the Skycontroller. The controller provides far greater control options as well as extended range for the device - up to 1.4 miles. I unfortunately don't have a Skycontroller to test, but if you consider yourself among the pros, but don't feel like shelling out thousands of dollars for more expensive drones that have them, you will definitely want to give it a look. You can even plug in Field-of-View (FOV) glasses via the HDMI input, for a more immersive experience.

The most important aspect to any drone is how it flies, and the Bebop 2 is fairly easy to get the hang of. After my first flight, I was gliding around and doing flips with relative ease. By my third flight I had graduated to normal controls and was juking in-between trees and under bridges. You can get a sense to how it flies and operates in the short video above. I haven't crashed it yet and crash testing is not something I plan on performing, but the body feels sturdy enough to take some damage, but I would do my best to avoid head-on collisions all together.

The video from the camera is smooth and looks great, but on really sunny days the camera struggled to find a good balance between bright and dark areas. Like I mentioned earlier, the camera is right on the nose of the craft which means a head-on crash will most likely break the camera. This is unfortunate and I wish Parrot sold a guard for it or at least a clear protective cover. They have an opaque one (shown below) for storage and transport, but this doesn't do me any good otherwise. At least they sell the camera module separately, which adds some piece-of-mind, but at $150 it's still something you'll want to avoid having to buy altogether.

It's also worth mentioning that this craft is over half a pound weighing in at 1.1 lbs, which means if you reside in the United States, you will have to register with the Federal Aviation Administration (FAA). Registration is free up until the 21th of January and lasts 3 years - plus you get fined if you get caught flying without this. Furthermore, be aware that there are specific restrictions on flying near stadiums and airports, as well as keeping your craft under 400 ft. You'll want to check your country's and/or state's specific laws before flying this guy around.

The Bebop also gains a helpful really bright led on the back side (seen above) to help with visual orientation of the craft. Unfortunately, unlike the original version, the Bebop 2 doesn't come with hull guards leaving your propellers unprotected. This makes it more difficult to recommend to beginners who may not be immediately comfortable flying and pretty much rules out flying indoors - which is already terrifying enough. The worst part is that you can't buy them separately either, the only guards they sell are exclusive to the original Bebop.

Overall, the Bebop 2 is a blast and is easy enough to pick up after a few sessions. Though it overall feels well built, but I can't fly without worrying about the awful camera location on the nose. The Parrot Bebop 2 starts at $550, which is a step up from their AR Drone 2.0, but noticeably more premium and capable. For an extra $250, you can pair it with the Skycontroller for the physical controls, extra range, and FOV features. Check out the gallery below for a closer look at the hardware and app. You can pick one up directly from Parrot as well as your local Microsoft Store. If you have any questions, feel free to comment and I'll do my best to answer!