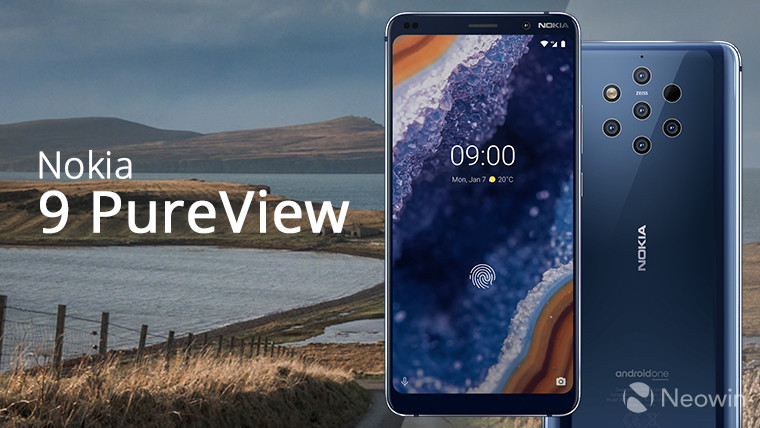 Since today is essentially day 0 of Mobile World Congress 2019, a number of companies are taking the wraps off unannounced products. Among them, HMD Global.

Though four Android-based smartphones were unveiled, along with a feature phone - the 210 - and a pair of wireless charging accessories, HMD highlighted the Nokia 9 PureView. As folks may remember, the handset leaked quite some time ago, though it only now made its official debut. The 'PureView' branding isn't accidental, as HMD acquired the trademark back in August of last year, and is as such resurrecting it for the high-end device. PureView was used on devices like the Nokia 808, 1020, 920, and others.

Featuring "the world’s first five camera array with ZEISS Optics", the notch-less 9 PureView supports the saving of images in uncompressed, DNG format. You can see its spec sheet in the table below, along with those of its notch-bearing 4.2 and 3.2 siblings.

Along with the phone's specs, HMD has also released a number of promo videos for each device. Here's the one for the Nokia 9 PureView:

Beyond the trio of devices above, there are also two others that are worth noting, the Nokia 1 Plus (not OnePlus), and the Nokia 210. Here are the specs:

Folks curious can check out the promos for the Nokia 1 Plus and the 210 below:

To accompany the devices above, HMD has also released a pair of wireless chargers. One is a wireless charging plate which has a maximum output of 10W and connect to an outlet via micro-USB. The second is the Portable Wireless Charger, a power bank with a 4,520mAh capacity, 5V / 1A wireless output (5V / 2A USB output), and USB-C connectivity. Neither availability nor pricing has been made available for these two accesories, but we have reached out to HMD for further details.