Launching at the end of this month, Microsoft's Windows 10 is expected to be widely successful and see widespread adoption - in part, due to it being a free upgrade for those with existing installations of either Windows 7 or 8.1. As such, both OEMs and enterprise service providers are getting on the Windows 10 bandwagon, pledging their support and announcing new devices.

HP is the latest to throw in its hat, starting with support for its Sure Start BIOS-protection utility. This checks the BIOS for malfeasance before booting and is the only solution of its kind. Working in tandem with Windows 10's Device Guard, it makes HP's Elite and ZBook lines some of the most secure devices on the market.

The company has also assured corporate customers that all of its commercial products will begin receiving the Windows 10 update starting in August - also when devices will start to come with Windows 10 pre-installed - and that its entire portfolio will be onboard by October. 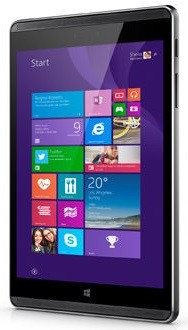 Not stopping there, the company is also announcing a couple of new devices: a limited Bang & Olufsen edition of the HP EliteBook Folio 1020 and the HP Pro Tablet 608. Both will be aimed at the enterprise. Launched last year, the Folio 1020 was described as a "quality machine" by our reviewers and is powered by an Intel Core M processor. The 12-inch notebook will come with the option of either a 1080p or 1440p screen, with an optional touch panel.

On the heels of that announcement is the HP Pro Tablet 608 (pictured right), an 8-inch tablet sporting 4 GB of RAM and128 GB of eMMC storage, with a 4:3 aspect ratio and a resolution of 2048x1536. Under the hood of this is the Intel Atom-Z8500. The tablet also includes a USB Type-C port and a myirad of accessories, such as a pen, docks and keyboards.

Pricing for the Bang & Olufsen HP Elitebook Folio 1020 will be released around launch, which is expected to be around fall. Meanwhile, the HP Pro Tablet 608 will be available around August, starting at $479.