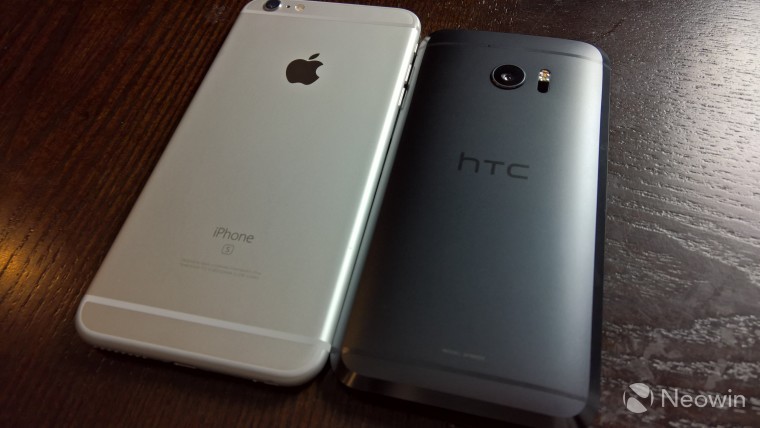 The more I use the HTC 10, the more impressed I am with HTC's latest flagship. It would appear that this is another step toward redemption for the struggling firm.

* - 64 GB model is not available in the United States 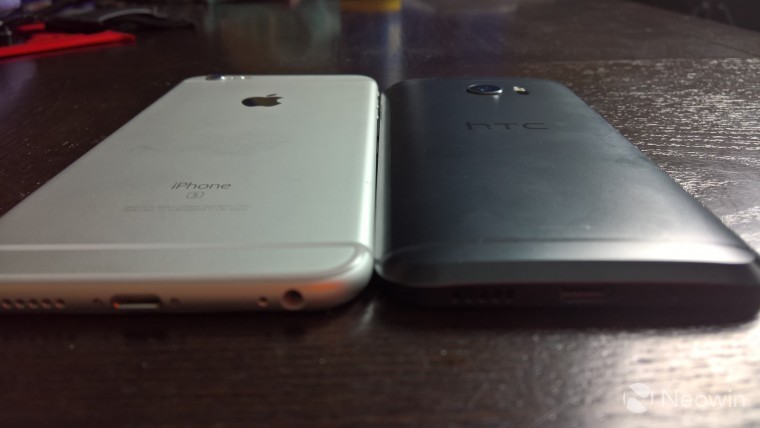 If you follow the world of technology at all, at some point you've surely heard accusations that Apple copied HTC's design language with the iPhone 6 and 6 Plus. I'm not here to make such accusations, but it is clear that the two devices share a similar design.

They both have metal unibodies with antenna lines; however, that's where the similarities end. Personally, I've never been a fan of the 6s Plus design. It's big and flat, making it fairly uncomfortable to hold compared to a device with a more rounded back, such as the HTC 10.

They're both beautiful devices. There is no doubt about that, but the win for design goes to the HTC 10.

The display would have to go to HTC as well. While they both use LCD panels, and they're both among the best in their respective classes, the display on the 10 is stunning. If you didn't read a spec sheet before using the device, you would believe it's an AMOLED. That's how vibrant the colors are. 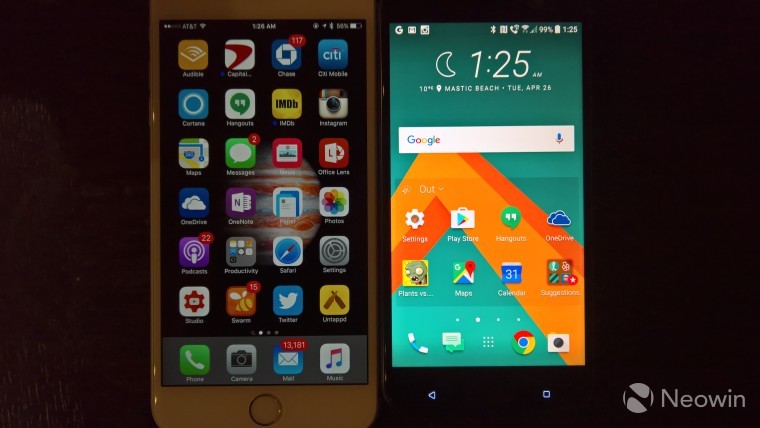 While the iPhone's display would have to go down as almost as good as the 10's, the resolution is 1080p. I tend to maintain that 1080p is all that's needed for a display this small (unless you use it for VR), it's far less taxing on the GPU with minimal sacrifices. Paired with one of the most powerful GPUs in modern smartphones, it makes for a splendid experience, especially if you like to play games on your phone.

Just about every smartphone worth having these days has a fingerprint reader, and some are better than others. Apple was among the first to use a decent one with the iPhone 5s and the firm has since advanced its biometric technology.

The iPhone 6s Plus ships with TouchID 2.0 and if you're a longtime iPhone user, it takes a bit to get used to. For years, users have been trained to unlock their phone with the home button, but now that TouchID is so fast and accurate, users must learn to press the power button to wake their phone if they wish to interact with the lock screen.

The fingerprint reader in the 10 is among the better fingerprint readers on the market, but certainly not the best. In other words, it certainly beats the Galaxy S7 in terms of both speed and accuracy, but it doesn't match the best-in-class Nexus 5X/6P and iPhone 6s/6s Plus.

Hardware
It would seem that 12 MP cameras are the latest trend in smartphones. For years, OEMs were trying to jack up the megapixel count as much as they could (mostly as a marketing gimmick), but now they seem to be seeing the light (pun intended).

In other words, megapixels don't really matter at all once you get to a certain point. There are also benefits to a lower resolution. This will allow for larger pixels, creating a less noisy image. Larger pixels are key to HTC's 'ultrapixel' technology. Since both of these devices have the same resolution but the HTC 10 has a larger sensor, it has larger pixels.

It would seem that 12 MP is the sweet spot for having a high enough resolution to record 4K video - as both sensors record their maximum resolution at 4:3 - but low enough to prevent noisy images.

A larger sensor and a larger aperture also allows more light to enter the camera, which should allow for better low light performance.

Of course, optical image stabilization (OIS) helps as well, a feature that both of these devices offer. Basically, OIS keeps the camera steady if your hands aren't.

It's also worth noting that the two devices also focus differently. The HTC 10 uses laser focus, a feature made popular by LG; meanwhile, the iPhone uses phase detect autofocus (PDAF).

Software
In terms of software, both of these devices offer very different experiences. As Apple devices tend to be, the iPhone's Camera app is locked down. Users don't even have the option at take a photo at a 16:9 aspect ratio - unless snapping a photo while recording video.

The iPhone also offers no manual controls. This feature is offered through various third party apps, however. 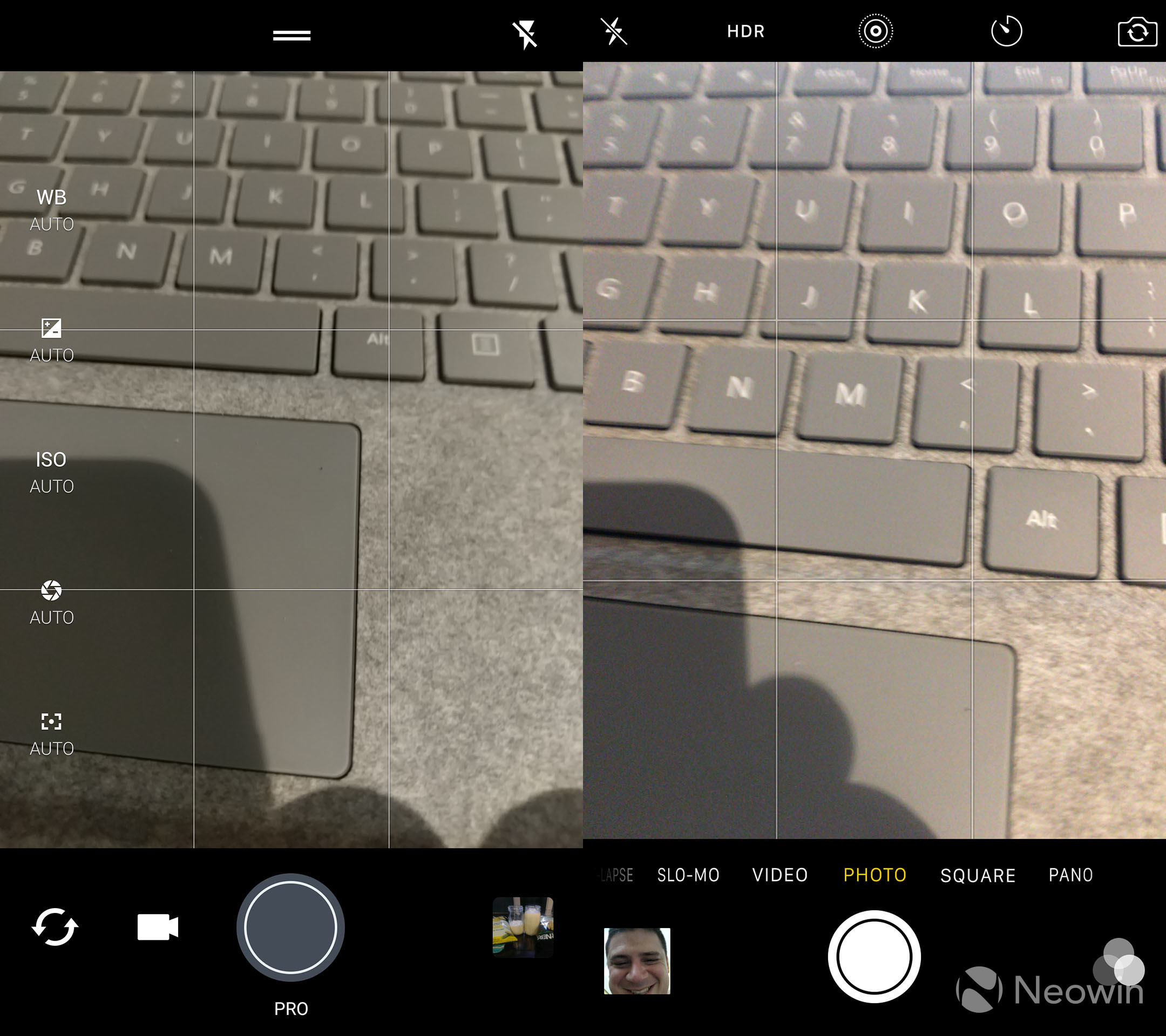 One benefit to the iPhone's camera is that it offers 1080p 60fps video. This is something that HTC has declined to include in the 10.

HTC has offered a completely redesigned Camera app in the 10. Unlike the iPhone, it offers a Pro mode, which allows for manual controls, as well as saving DNG files along with a JPEG. DNG is an open sourced RAW format. If you're not familiar with it, you can think of a RAW file as the digital equivalent of a film negative, which provides you with a whole lot more data to edit with.

It seems that the iPhone wins in just about every area. First, note the blue/purple flowers at the top. In real life, they're blue, despite the HTC 10 rendering them as purple. It's a common issue among smartphone cameras with those particular flowers, but the best cameras render them in or close to their true colors.

The iPhone also handles bright lights better. With the HTC 10, many of the lights seem blown out.

Nighttime performance seems to be about the same, if not a bit better on the HTC; however, the HTC looks much better when using the flash.

Both of these devices use a 5 MP front camera that allow the screen to light up and serve as a flash. HTC, however, has taken it to another level.

Another advantage in the 10 is that it records 1080p video. It's not a major deal in comparison with the rest of the market, but when Apple bumped up its front camera to 5 MP last year, the video resolution stayed at 720p.

This is the part of the review where I tell you not to put too much stock in benchmarks, but we provide them anyway because people want to see them.

The first test will be AnTuTu Benchmark, an app that provides a great all-around test for the device, also providing an overall score.

As we can see from the tests, the HTC 10 wins in just about every area except CPU, providing the higher overall score. What's interesting is that when we compared the Samsung Galaxy S7 to the iPhone 6s Plus, they were around the same score. Despite having the same chipset, the HTC 10 seems to perform better.

Next up is Geekbench 3, which tests the CPU.

Perhaps unsurprisingly, the iPhone wins the single core score while the HTC 10 wins the multi-core score. This is similar to the results that we achieved when we compared the iPhone with the Galaxy.

Finally, we have GFXBench, which will test the GPU.

As we can see, in many cases, the iPhone did better, but the HTC did better in the offscreen tests. This means that the 10 actually has the better GPU; however, the 1440p display drags it down to the point where the iPhone performs better, according to the benchmarks, at least. 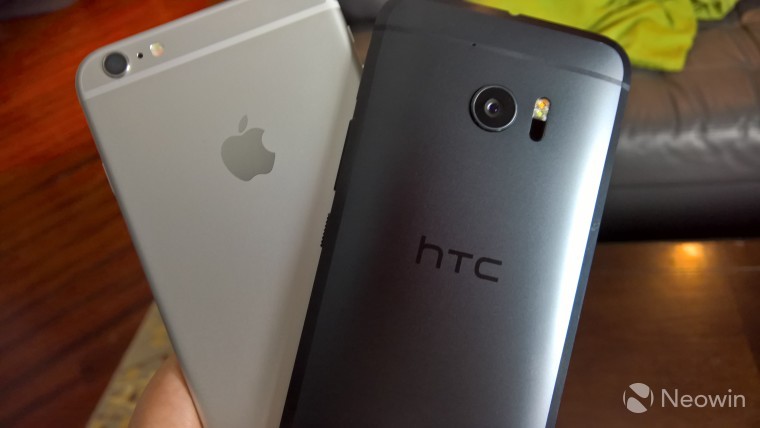 It's fair to say that these are both really awesome phones. Before we dove into the camera, we compared the design, display, and fingerprint readers. While HTC won the former two and Apple won the latter, the losing side didn't provide a poor offering. In fact, in many cases, each had their own advantages and disadvantages.

If you're choosing between these two devices, it's more likely that for you, it's going to come down to a preference between iOS and Android. It's worth noting at this point that HTC has provided a much more clean experience than its predecessor, so there isn't two of everything (Email and Gmail, Internet and Chrome, etc.).

It's tough to declare a winner between the two devices. They're both fantastic and they both offer different things. If I had to choose one, it would be the iPhone, but only because the better camera makes it better all-around. Every other area was a close call.