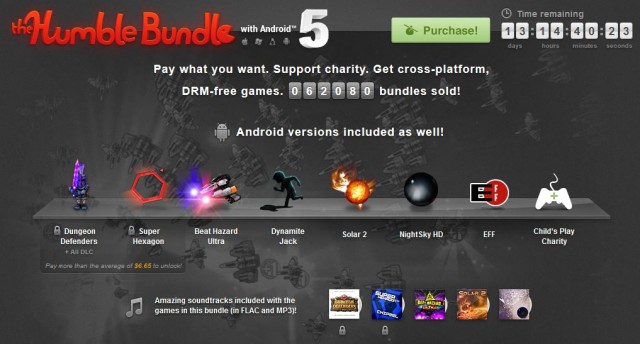 Have you heard about the Humble Bundle before? We've talked about them over on our sister site, Neogamr.net, before, and they're a great way to get a bunch of DRM-free games at a great price – whatever you want to pay!

Not only do you get the games (and you can play them across many platforms – Mac, Linux, PC, and now Android), but the bundle also lets you download the soundtracks to many of the games. And as an added bonus, if you pay more than the current average price, you're also entitled to bonus games. It's a great way to get exposure to a lot of different games at a very affordable price.

The latest bundle includes four games – Beat Hazard Ultra, Dynamite Jack, Solar 2, and Night Sky HD. If customers pay more than the average – currently $6.65 – they can also download Super Hexagon and Dungeon Defenders, including all of the available DLC for the latter game. As noted previously, this also includes soundtracks for five of the six games. What makes this bundle a little more unique than some of the previous bundles is the fact that not only can you download the games on a Mac, PC, or Linux, but also on your Android phone or tablet, and they're all available for the one low price.

The other unique part of the Humble Bundle offering is the fact that you get to decide how your money is distributed. After selecting how much you'd like to contribute, you then get to decide how much of that money goes to the developers, how much goes to charity (a nice touch), and how much goes to the Humble Bundle folks. You can even break it down further by giving more money to one developer than another.

We think this is a really unique way to sell software, making it available to anyone regardless of economic constraints, although the site does try to make you feel guilty if you donate only a penny: Try it out and see what we mean!