According to John Curran, president and CEO of the American Registry of Internet Numbers (ARIN), the Internet will run out of IPv4 addresses to allocate in less than a year. The sentiment was echoed by Vint Cerf, Google’s Chief Internet Evangelist. According to ReadWriteWeb, reasons for the ominous prediction include the proliferation and innovation of technologies like RFID and smart power grids, as well as the astronomical increase in mobile device data connections worldwide.

An IPv4 address is 32 binary digits long, which makes for 4,294,967,295 total addresses. According to ARIN, of these 4 billion or so addresses, only 234,369,845 addresses remain. While that may seem like a big number, it’s really only 6% of the total number of available addresses. The Internet Assigned Numbers Authority (IANA), in its report today, released some graphical data on the current allocation of Ipv4 addresses. In the graph below, an interesting unit is used. On the y-axis, the ‘Assigned IPv4 Count’ is counted by /8 IP blocks. In layman’s terms, an /8 block of IP addresses consists of approximately 11 million addresses (all the possible IP addresses in 00000001.xxxxxxxx.xxxxxxxx.xxxxxxxx). 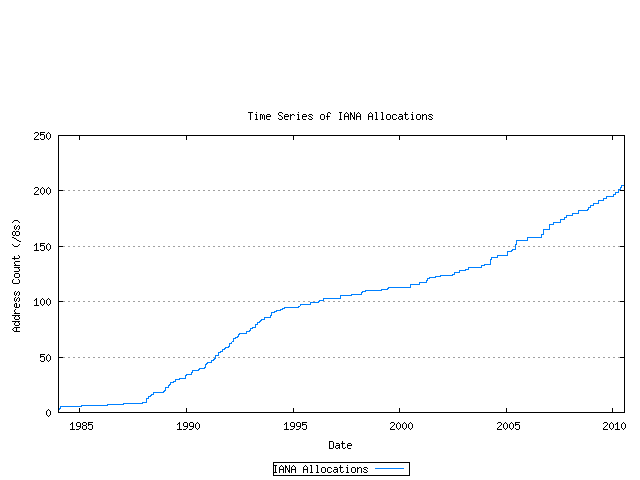 As you can see, more than 200 blocks of addresses have already been marked for allocation by the IANA, and the curve doesn’t look like it’s about to taper off. The solution: IPv6. Putting aside other various technical advantages it brings to the table, the IPv6 address space is 128-bits long. That’s a total of 340,000,000,000,000,000,000,000,000,000,000,000,000 total addresses. That’s more than 4 billion addresses for every living human being, and definitely more than enough for our current and future needs for years if not decades to come.

Obviously, just up and going to IPv6 is easier said than done. While there are many incremental implementation strategies making their rounds in the networking world, many companies simply don’t feel that the problem is dire enough to warrant a costly and time-consuming endeavor that may or may not be financially rewarding to the business at the moment. Some of the bigger telecommunications companies, like Verizon and Comcast, have already started trial IPv6 implementations, and Google has already affirmed that IPv6 needs to happen soon.

“At Google, we believe that IPv6 is essential to the continued health and openness of the Internet – and that by allowing all devices on a network to talk to each other directly, IPv6 will enable innovation and allow the Internet's continued growth.”

The IANA predicts that July 1, 2011 will be the day that they run out of unallocated addresses to give out. This is based on analysis of time-based data, and those interested in a lot of statistics and charts can head over to their report to find out how exactly they came up with that number and how confident they are about its accuracy.