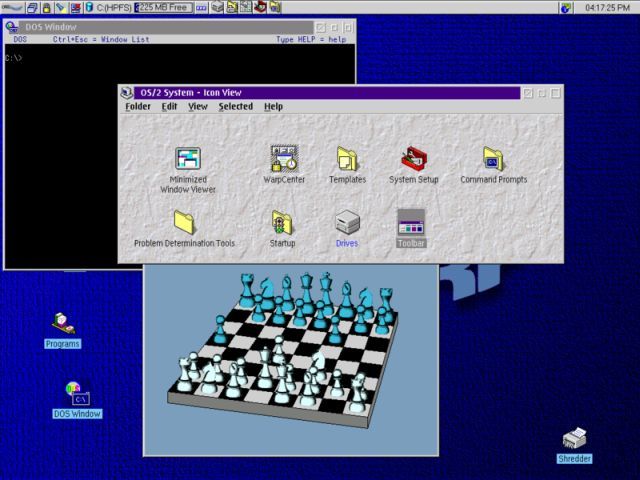 25 years ago, IBM was still the biggest force in the PC industry. On this date in 1987, the company announced a new partnership with Microsoft that at the time seemed to be the next major step in the PC's evolution: The launch of OS/2. However, the operating system failed to gain a foothold in PC desktops and the reason lies ironically with Microsoft.

Time.com's site has an interesting article today on the rise and fall of OS/2. The story points out that while it was announced on this day 25 years ago, it wasn't until December 1987 until version 1.0 was released. Even after its launch, OS/2 still didn't have a lot of features, including basic items such as having a graphical interface for mouse interactions, until a year later. OS/2 was also a resource hog; most PCs of that time didn't have the memory to support OS/2's 4 MB requirements.

In the end, IBM's partner on OS/2, Microsoft, broke off its development arrangement and released Windows 3.0 in 1990. Most PC owners installed and used it thanks to its Mac-style graphical interface. In 1992, IBM launched the 2.0 version of OS/2. It was a huge improvement from the original and it could handle OS/2, Windows and DOS programs all at once and had 32-bit software support (although it still had a few 16-bit drivers).

Even with the improvements, O2/2 2.0 still had some high system requirements, and more consumers and businesses still moved on to updated versions of Windows. OS/2 3.0 came out in 1994 but PC users decided to wait until Windows 95 came out a year later. IBM kept releasing updated versions of OS/2 but by then the writing was on the wall. The company released the final version of OS/2 in 2001 and stopped full support of the OS in 2006, although IBM will still offer some support for a fee.

OS/2 was in many ways a PC operating system that was many years ahead of its time, with some features that Windows didn't incorporate for a number of years, such as right-clicking on the OS to change settings. Even today, OS/2 is still in use running some older ATMs or inside the system that delivers the Metrocards for New York City's subway system.  A company called Serenity Systems International even sells an OS, eComStation, that is based on OS/2 and runs all OS/2 based programs.