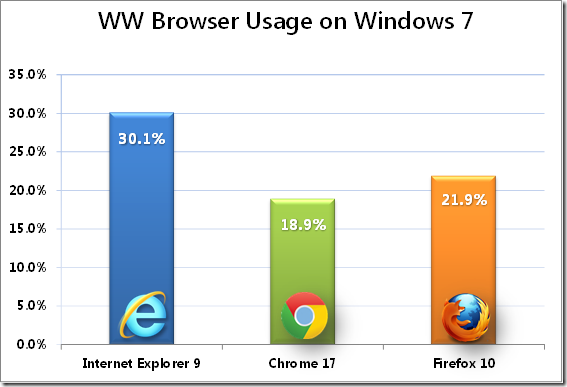 As they always do at the beginning of each month, Microsoft made a new post on the official Internet Explorer blog site to talk about the latest gains that its Internet Explorer 9 web browser has made with Windows 7-based PC users. Today, the blog announced that, based on data from Net Applications, IE 9 now has 30.1 percent of the worldwide web browser market share for Windows 7, compared to 18.9 percent for Google's Chrome 17 browser and 21.9 percent for Mozilla's Firefox 10.

Overall, the Net Applications web site shows that in February, Internet Explorer 8 was still the number one most used web browser in the world with 27.85 percent of the market share, followed by IE 9 with 12.60 percent. Firefox 10 came in third with 8.44 percent, followed closely by Chrome 16 with 8.09 percent and Chrome 17 with 8.06 percent.

Of course, Microsoft just launched the new version of Internet Explorer 10 for users of the Windows 8 Consumer Preview. It will be interesting to see how many people will be using IE 10 in the next month.