Choosing the right smartphone isn’t always easy, especially for those who don’t studiously examine every detail of a device’s spec sheet. The ‘average’ consumer – if there is such a thing – probably doesn’t care that this phone is 0.5mm thinner than that one, and most end-users would struggle to articulate the benefits of having more RAM or a multi-core processor. Ultimately, many buyers rely not on which handset has the most extreme components, but rather on recommendations, including those from consumer groups and market research organisations.

J.D. Power and Associates is a leading organisation in this field, and it has just delivered the results of its latest smartphone satisfaction survey. In its seventh consecutive win, Apple has beaten other smartphone manufacturers to the top of the satisfaction chart, achieving a score of 839 out of a possible 1000 points. HTC was second in the chart, achieving an impressive 798; these were the only two companies to exceed the industry average score of 774.

LG and RIM came in well below average in the satisfaction index, but Nokia is perhaps the brand that's got the most work to do here, scoring just 702, and lagging some way behind its smartphone rivals. Only Palm performed worse, and given its current status - in a sort of open-source limbo - it's unlikely to see significant gains any time soon. 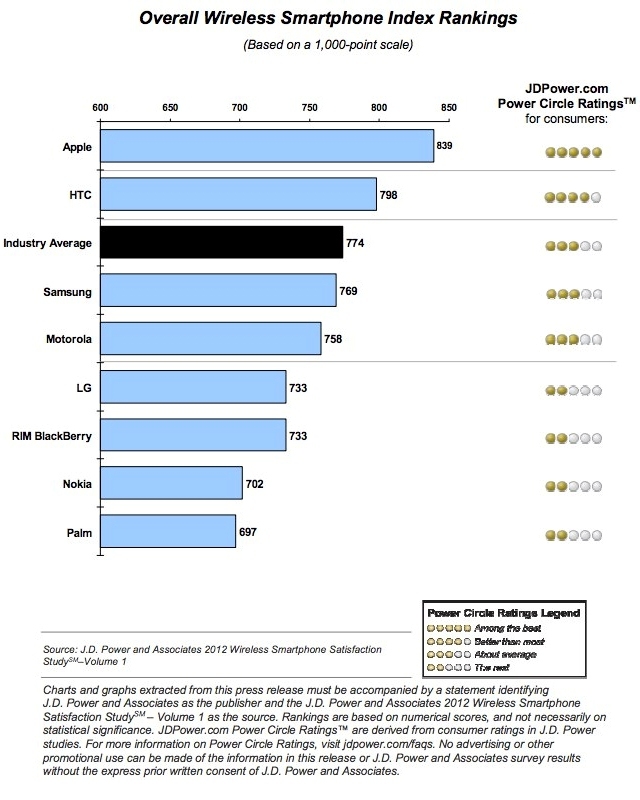 A key finding of the study was the impact that battery life has on a user’s enjoyment of their handset. Owners of 4G devices rated battery life on their devices at 6.1 out of 10, compared with 6.7 out of 10 for 3G handsets, with both of these figures declining significantly compared with the results of the last study in September 2011.

Kirk Parsons, senior director of wireless services at J.D. Power and Associates, noted that when it comes to battery life, “the study uncovers the need for a greater sense of urgency – short battery life can result in perceived phone problems, higher rates of merchandise returns and customer defections.” Just 25% of 4G smartphone owners said they were ‘highly satisfied’ with their battery life and ‘definitely will’ buy another handset from the same manufacturer.

The survey also found that 21% of smartphone owners reported a software or hardware malfunction with their handset during the review period. Worryingly, this included numerous customers who reported that their handset’s software crashed at least once a week.

Interestingly, consumers identified the physical design of a device as the least important measure of their satisfaction with it, with just 20% of users identifying this as a priority. 35% of users stated that the performance of their smartphone was the key factor here, with 24% claiming that ease of use mattered most. Evidently, some consumers are just happy to know that they’ve got the horsepower under the hood, even if it’s not particularly easy for them to unleash it.