Don't you just love RIAA statistics? Listen.com co-founder Rob Reid took a look at the math behind some of those crazy losses projections during a TED talk, and the results are pretty interesting.

To start with, Reid takes a look at the projected loss from every song that gets pirated, per the Copyright Damages Improvement Act of 1999 - that totals in at $150,000.00 for every single pirated song. Industry leaders feel that this number is a little low, since it doesn't account for inflation. But assuming that someone fills up an iPod Classic with pirated content, which would end up being somewhere around 40,000 songs, then they're carrying around $8 billion worth of stolen goods in the palm of their hand! Isn't that awesome?

The job losses are even more staggering. Each iPod accounts for about 75,000 lost jobs! Sadly, this means that the music industry is no longer employing anyone, since they only employ around 45,000 people. Another industry fallen to the scourge of digital piracy. 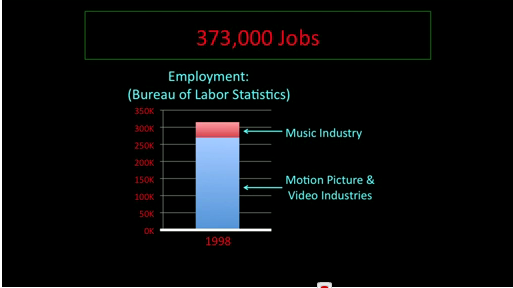 And what about the MPAA's statistics? They're looking at $58 billion in losses and have been forced to cut 370,000 jobs from the hardworking American labor force. Interestingly, though, movie and TV revenues are actually up from their 2000 statistics. In fact, the only losses that Reid was able to find happened to the music industry, amounting to about $8 billion of losses (one iPod classic). The rest of these losses must therefore be due to industries that didn't exist in 2000, such as ringtone piracy.

Oh, and $58b? Yeah, that's the size of the entire US agricultural industry: 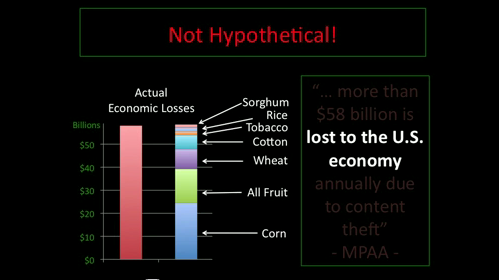 Reid concludes his talk by pointing out that even though this math is a little bit hard to understand to us mere mortals, it's a field best left to experts who get the science behind it. For his next talk, he'll be taking a look at the real problem facing the US entertainment industry: alien music piracy.

In the meantime, you can take a look at the video of his talk, courtesy of TED. Pretty neat stuff, even if it makes no sense whatsoever.