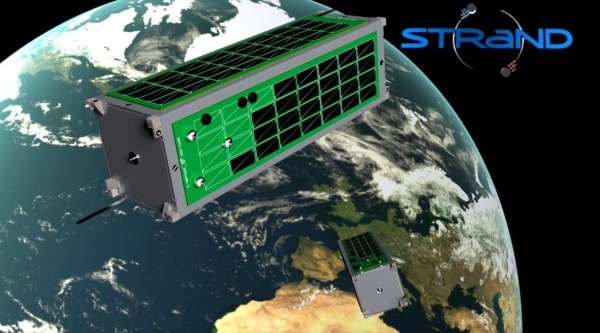 Microsoft's Kinect motion-tracking hardware has been used for more than just gaming since it launched, and it appears the peripheral will soon extend its list of accomplishments to include work in space as well. Engineers at Surrey Satellite Technology Limited and the University of Surrey are developing an in-orbit satellite docking system based on Kinect technology.

According to a press release issued by the company, the system will first be implemented in twin satellites that will test the technology. The mission, STRaND-2, will feature satellites that measure 30 cm in length and feature components from Microsoft's Kinect hardware. Kinect's hardware will allow the satellites to "scan the local area and provide the satellites with spatial awareness on all three axes." The mission is described as follows:

The STRaND-2 twins will be separated after launch. After the initial phase of system checks, the two satellites will be commanded to perform the docking procedure and, when in close proximity, the Kinect-based docking system will provide the satellites with 3D spatial awareness to align and dock.

Dr. Chris Bridges, SSC Project Lead, explains: “It may seem far-fetched, but our low cost nanosatellites could dock to build large and sophisticated modular structures such as space telescopes. Unlike today’s big space missions, these could be reconfigured as mission objectives change, and upgraded in-orbit with the latest available technologies.”

The news release claims docking systems have never been implemented in small, low-cost satellite missions; instead, docking technology has traditionally been found in big-budget space missions, such as the Apollo program, the Mir space station and the International Space Station.