Back in August, I reviewed Lenovo's Legion 5i, the 'i' standing for Intel. Now, the Legion 5 is here, and the key difference is, you guessed it, that it includes AMD's Ryzen 4000 processors. Alongside that, it has Nvidia's GeForce graphics.

Other than that, there's not a whole lot that's different, but I really wanted to check out what AMD has to offer in the gaming department. Also, Lenovo's gaming laptop designs are among my favorite, placing most ports in the back of the machine for better cable management. They're also just not as flashy as many gaming laptops on the market.

As far as the price goes, that's an estimate based on the closed one to this unit that I could find, and it's from Amazon. Amazon actually has quite a few configurations, while Lenovo.com only has two with the Ryzen 7, and if you choose to customize it, you can only pick a Ryzen 5.

As I said, Lenovo's gaming laptops design is among my favorite. It has an industrial design that looks stylish no matter where you bring it. It looks great for playing games, but it also looks professional enough to bring into an office. It's quite nice. 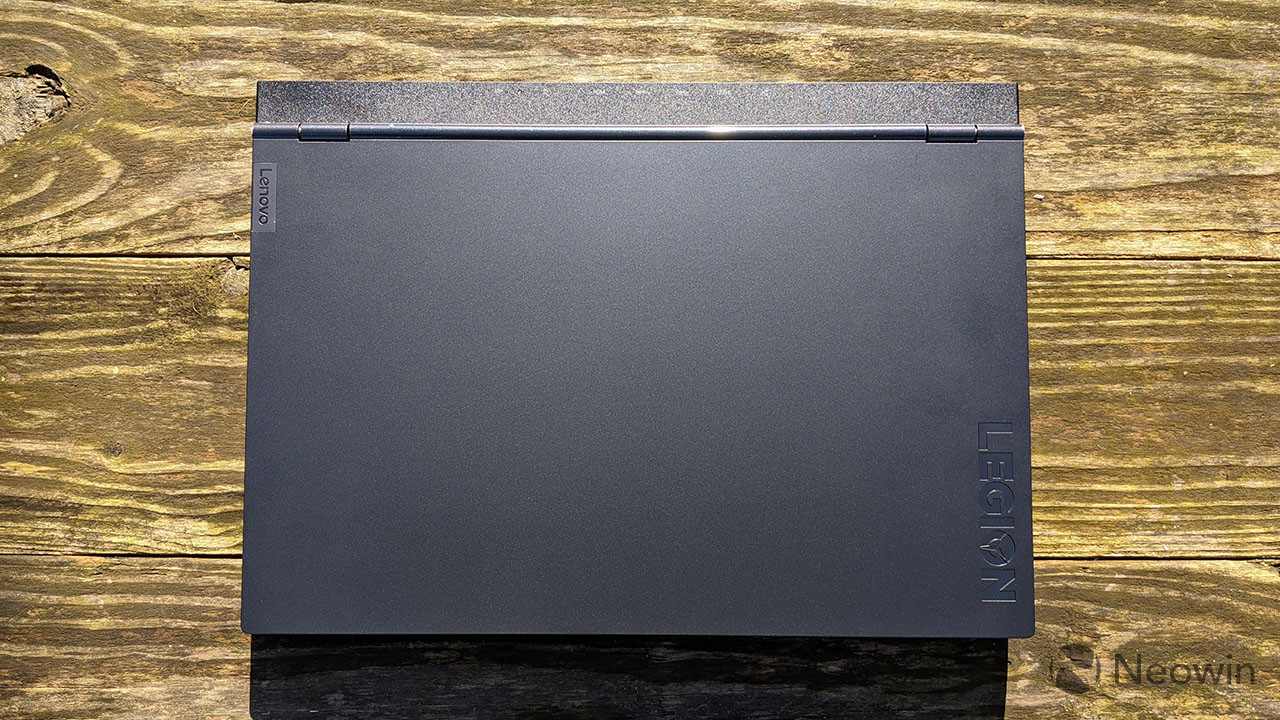 The color is called Phantom Black, which is strange, because I really don't think that it's black at all. It actually seems a lot more like a very, very deep blue. It's that kind of color where I could be mistaken though. 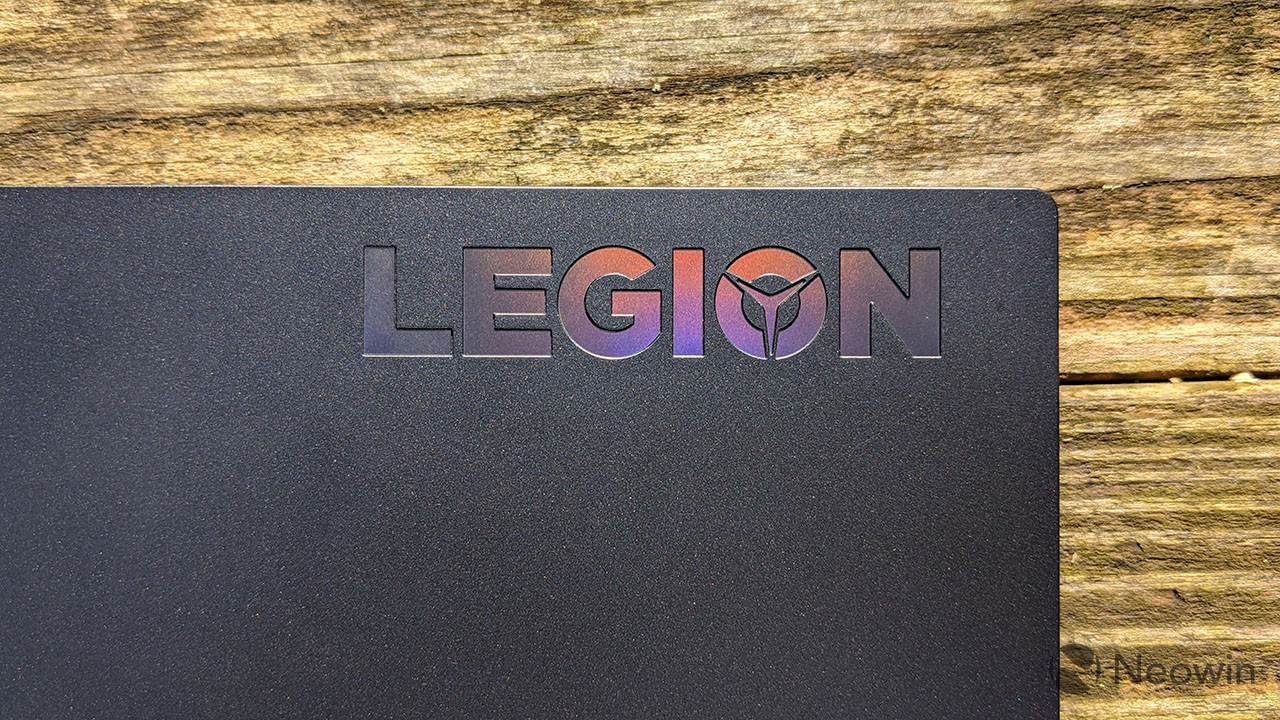 You'll notice the Legion branding in the corner, and this is something that only stands out as much as you want it to. It does have a white light in the Legion logo included in the 'O', but that's it. If you get a configuration with more RGB lighting, you can show it off a bit more. It's a very clean design, in my opinion. 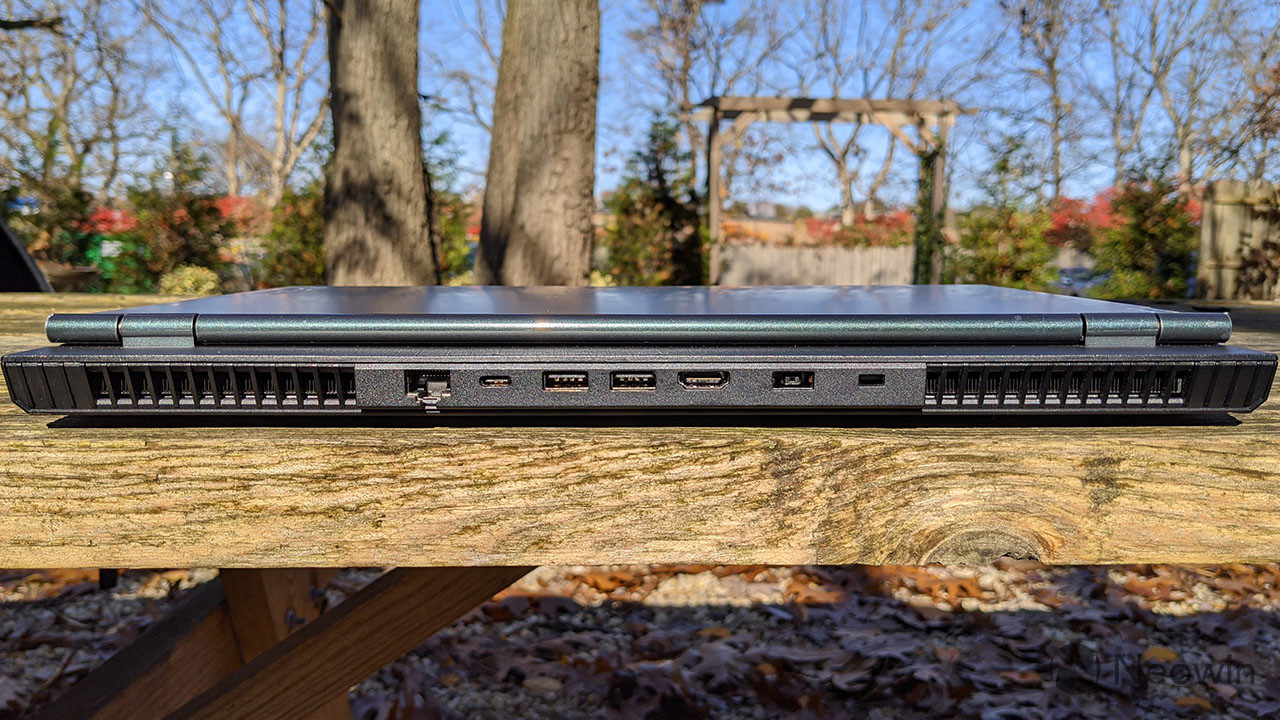 Most of the ports are located in the back, which is awesome. It's fantastic for cable management. If you're like me, than you game with wired peripherals, and it's a real pain when those cables are all sticking out the sides. Moreover, you'll be connected to power, something that you'll want for the best performance, and don't forget about wired internet. All of those cables can get in the way.

On the back of this machine, you'll find an Ethernet power, an AC power port, two USB 3.2 Gen 1 Type-A ports for 5Gbps speeds, HDMI 2.0, and USB 3.2 Type-C with DisplayPort. Being that this is the entry-level machine for Lenovo Legion gaming, there's no Thunderbolt connectivity. It's not on the Intel model either, so that's not being compromised on the switch to AMD.

The bad news is that the USB Type-C port does not support Power Delivery. It's not all that common on gaming laptops for Power Delivery to be supported, since they require so much more power than Power Delivery can carry, but I like to see it possible to at least charge the PC very slowly. 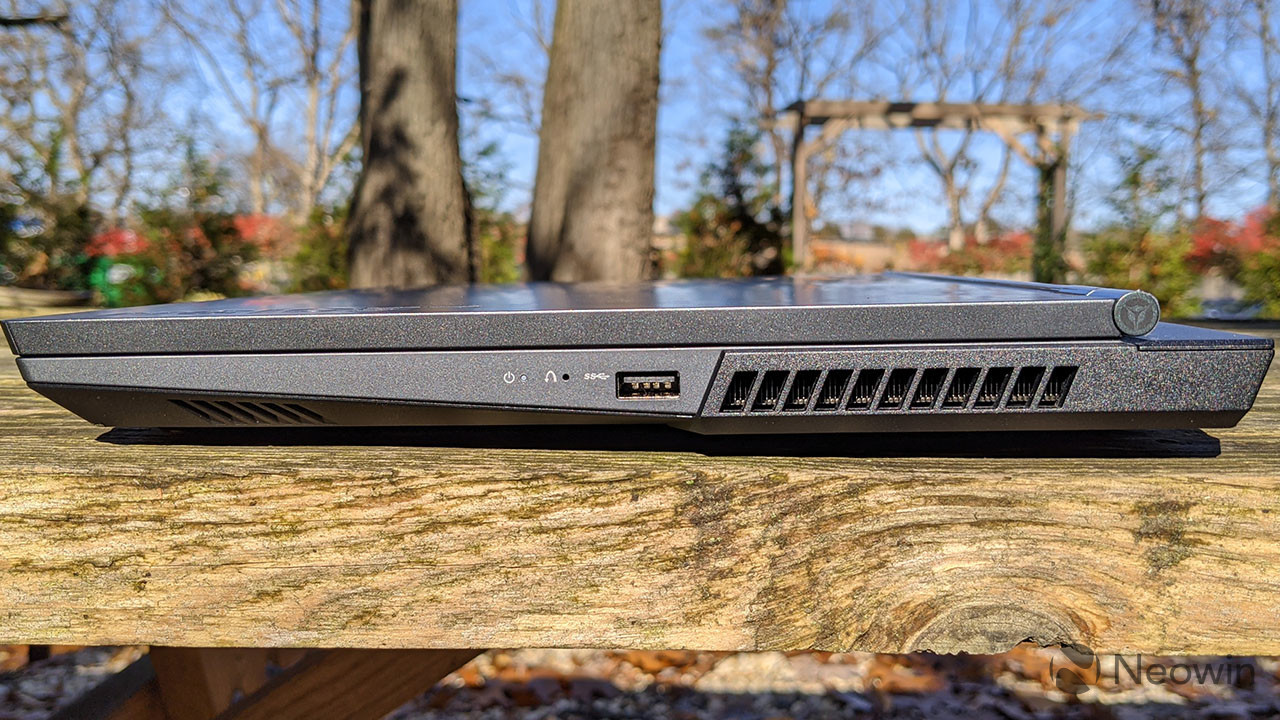 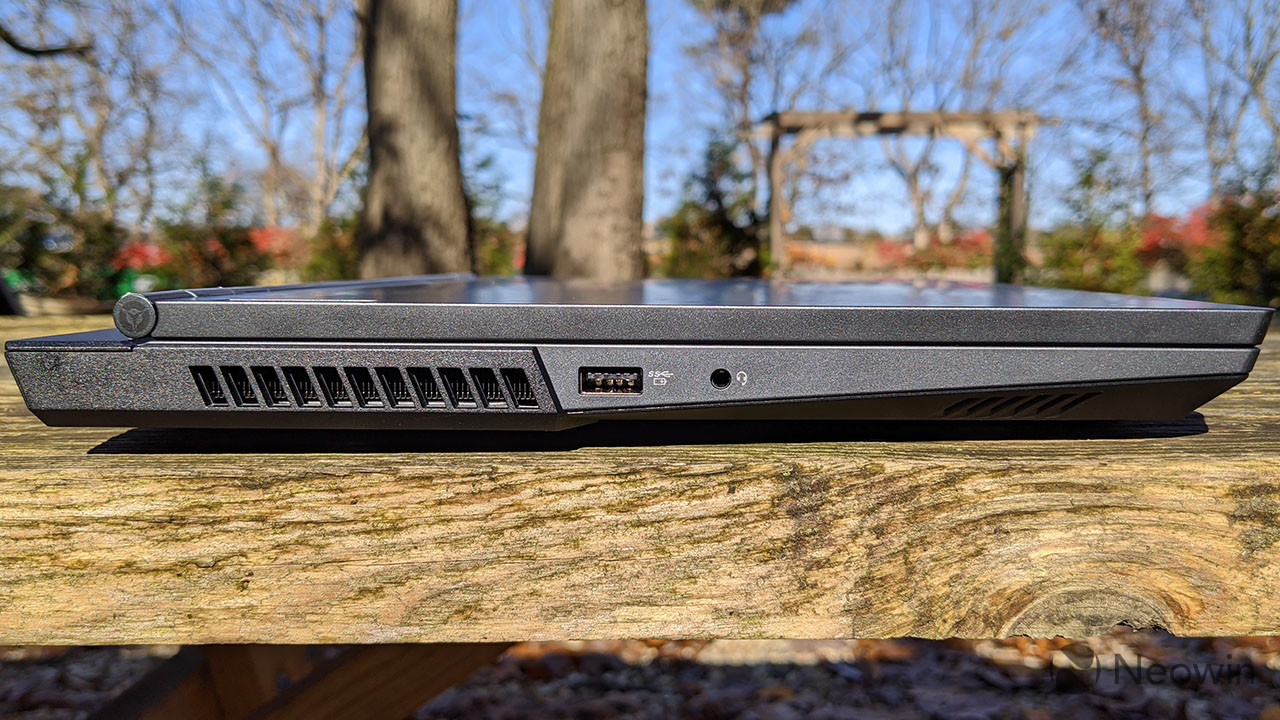 There's also one on the left side, alongside a 3.5mm audio jack. This is nice because it's easier to plug in peripherals on the fly. You can use the ports on the back for things that you have plugged in all the time, and then the ports on the side for things you're plugging in while using it.

The Lenovo Legion 5 packs a 15.6-inch FHD display with options of 60Hz, 120Hz, and 144Hz for the refresh rate. Lenovo sent me the 144Hz one, which is obviously the best for gaming. The higher the refresh rate, the smoother motions are and the faster you can react to things. It's not just about pleasing animations; you'll find real improvements to your gameplay here. If you want more than 144Hz, you'll have to look toward the higher-end Legion 7 series. 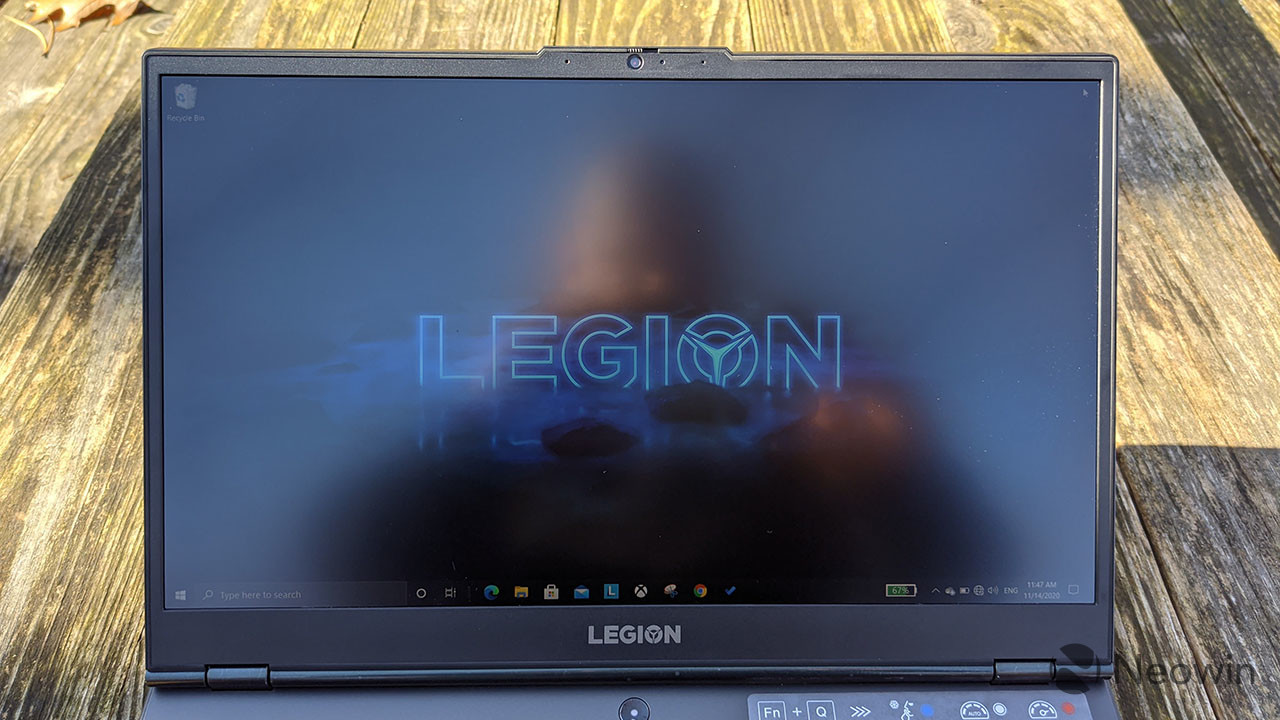 The screen comes in at 300 nits, which isn't tremendously bright. The good news is that this isn't really the type of machine that you'll use outdoors. Seriously, if you're looking for the super-portable machine that you can use anywhere and everywhere, there are PCs that are actually made for that. Another thing you won't find on this screen, or the screen of any gaming PC, is touch support. Just like glare, false touches are something that you don't want when playing a game.

You'll also notice that there's very little glare on this matte display. That's really important when gaming because you obviously don't want anything blocking your view. 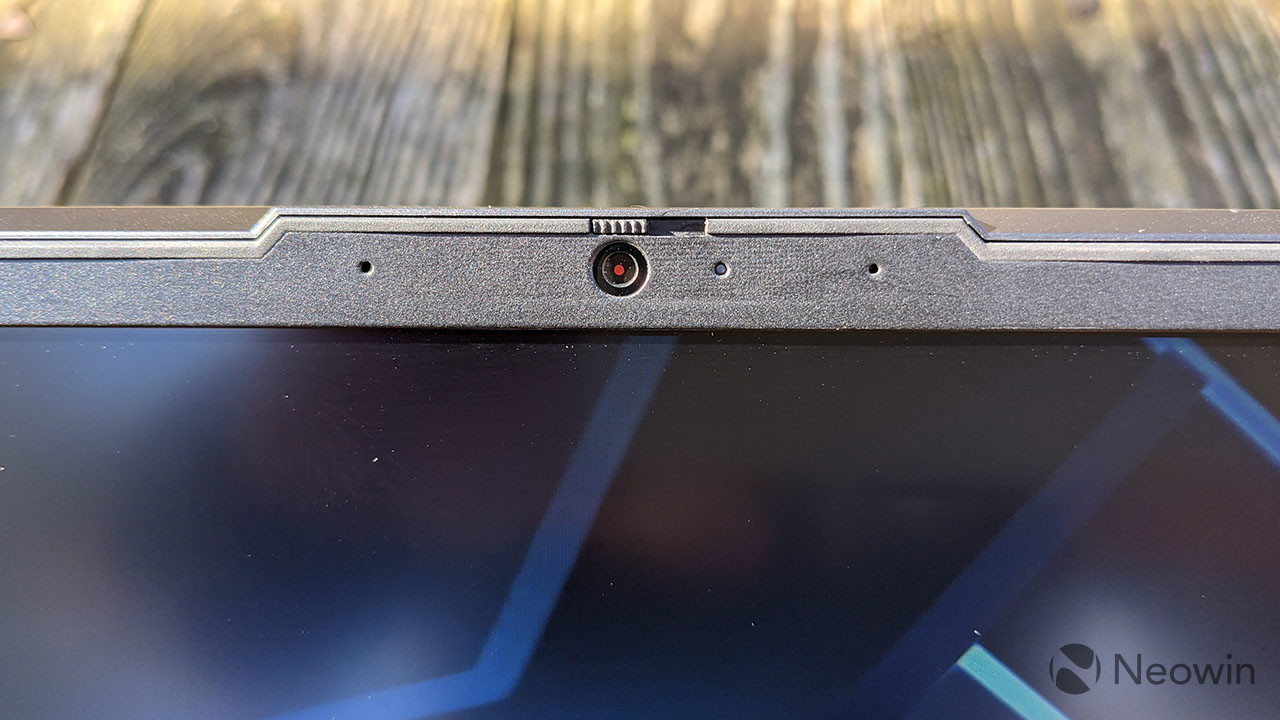 The bezels are pretty narrow all around, and Lenovo even uses its reverse notch on top to fit the webcam and a privacy guard. There's no IR camera for Windows Hello, something that you really won't find on any gaming laptop, and frankly, that's something that I still don't understand. There's no fingerprint sensor either.

As for audio quality, the two 2W Harman speakers sound great. They're not super loud or anything, but you'll presumably just be using them for immersive gaming sound, rather than filling a room with music. It certainly gets the job done for personal use. 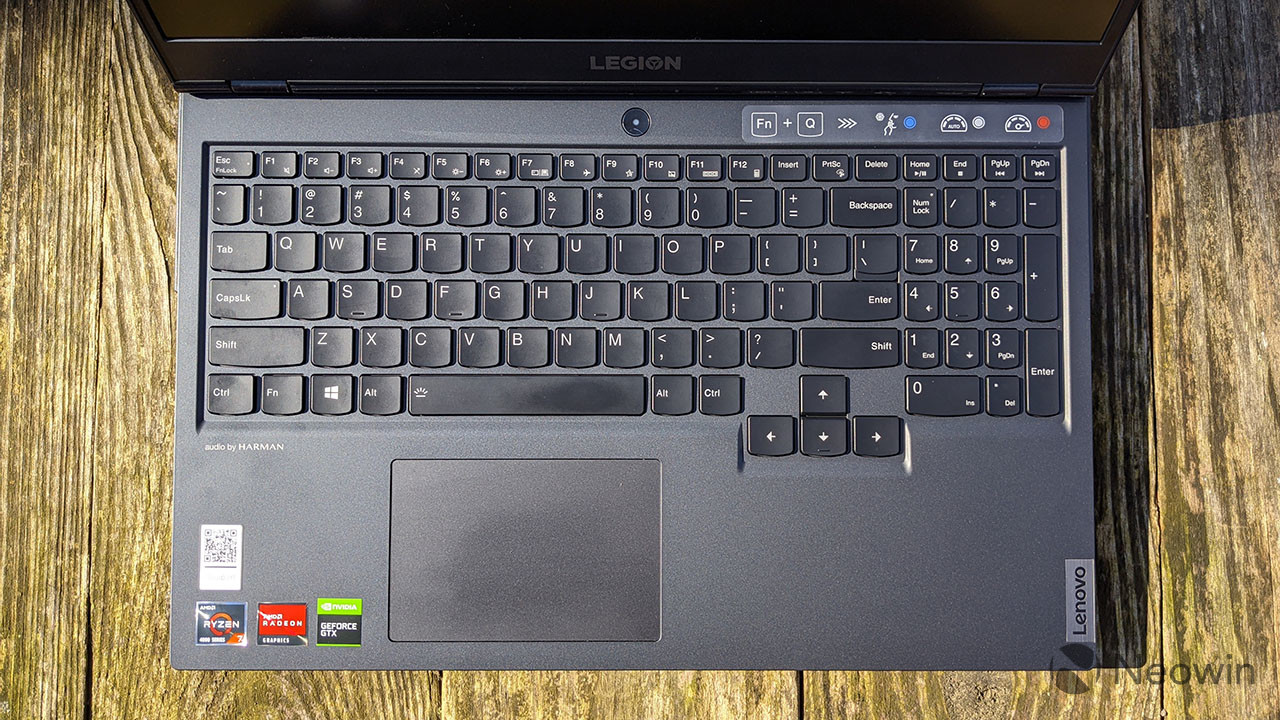 The keyboard has a numpad on the right, which isn't uncommon for 15.6-inch laptops. It's fine, and I know a lot of people prefer it, but I don't. I like a keyboard that's centered, so I do feel like it gets in the way. The point is, if you have a preference one way or the other, be aware of it. 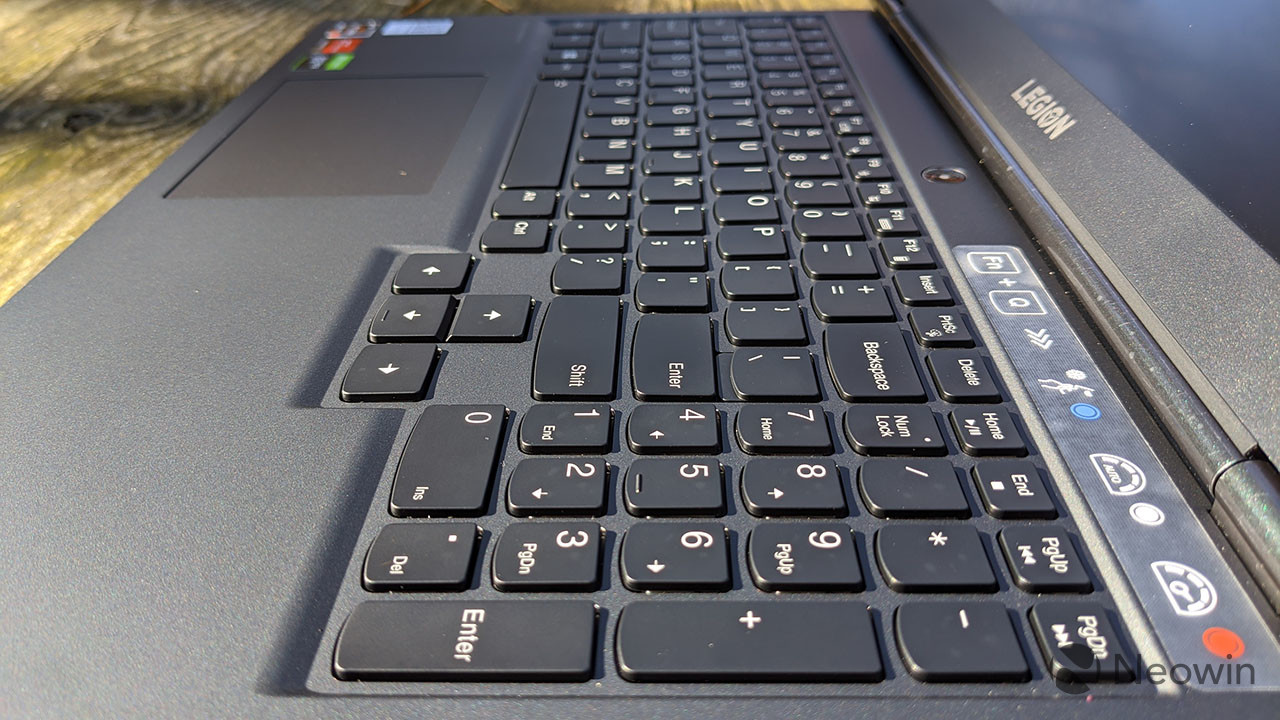 The keyboard itself is very comfortable to type on. Honestly, if you're spending good money on a Lenovo laptop, you'll always find this to be the case. The keys are somewhat shallow, and it's just like you'd find on any of Lenovo's consumer laptops (as opposed to ThinkPads). 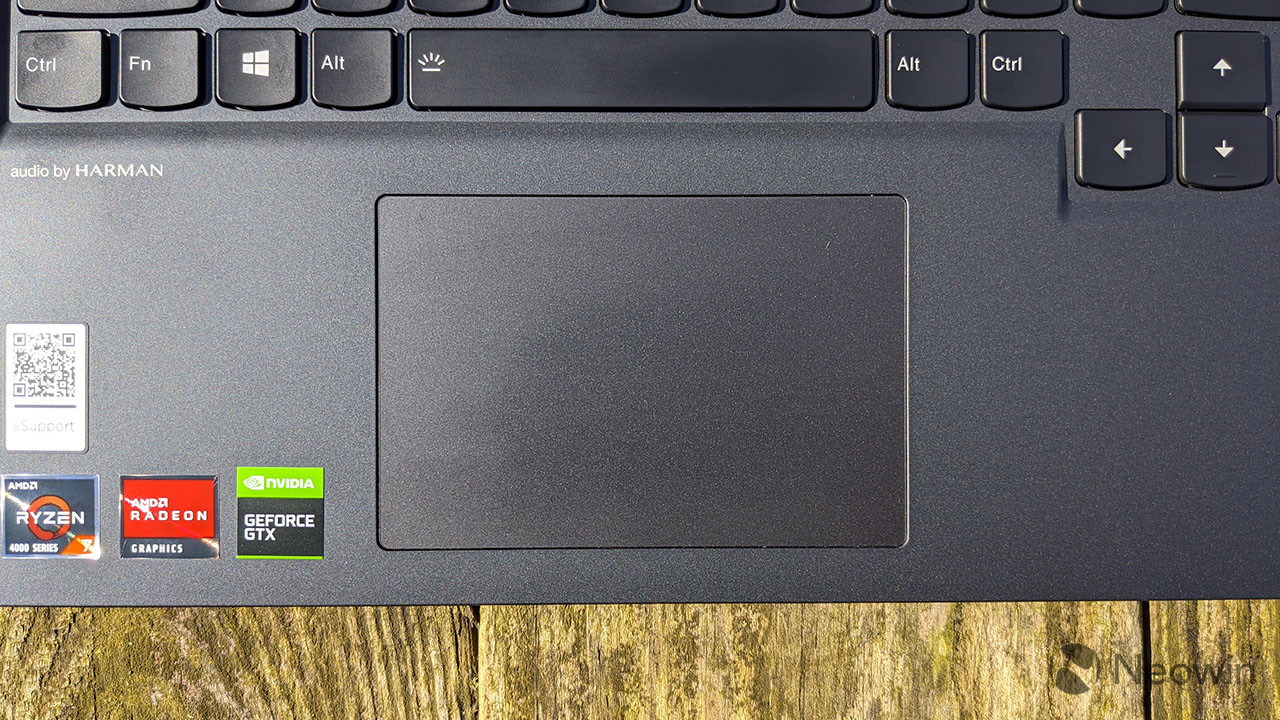 The Microsoft Precision trackpad is clickable, which is great for if you're using it for work, but not so great for gaming. If you use a trackpad for gaming, you'll definitely want to be aware of this, because accidentally clicking it could be an issue. I'd have expected to see a non-clickable trackpad with physical buttons.

The Legion 5 that Lenovo sent me includes an AMD Ryzen 7 4800H, and it's the main difference between this and the Legion 5i, which has Intel Comet Lake H processors. The Ryzen 7 4800H has a 45W TDP, just like the Intel options, and it has eight cores and 16 threads. A big difference with Ryzen 4000 has been that it's built on a 7nm process, while Intel is still on 14nm. Intel has only been able to move to 10nm on its mobile CPUs for thin and light PCs.

In my experience with AMD's Ryzen 4000 processors for thin and light PCs (U-series), they smoke anything that Intel can offer. That's not been my experience with the H-series, possibly because companies never seem to ship these things out with solid GPUs.

The unit that Lenovo sent me includes an Nvidia GeForce GTX 1650 Ti 4GB. It's not bad for FHD gaming at all, but for things like video and photo editing, I was not impressed at all. For 4K video editing, I found I actually got better performance from Intel's U-series Tiger Lake processors. Luckily, you can have this configured with up to an Nvidia GeForce RTX 2060, which should be solid.

For benchmarks, I used PCMark 8, PCMark 10, and a bunch more.

Looking at benchmarks, it seems like Intel's Core i7-10750H is a little bit better for single-core performance, but the AMD Ryzen 7 4800H is superior overall, making a big difference in multi-core performance and on the Creative test. I'd suggest opting for a better GPU though.

Battery life wasn't particularly impressive, maxing out at around four hours. There's nothing surprising there, since this does have powerful internals. I only looked up the battery report to see if this had a 60WHr battery or 80WHr. Since it's the former, the good news is that you can get it with a bigger battery.

Well, my two biggest complaints from the Legion 5i remain. One is that it has a clickable trackpad and one is that there's no Windows Hello. I don't personally mind the clickable trackpad, because I don't use it for gaming, and if you use a mouse, it's fine. Another con that I'm adding is sluggish performance under heavy workloads because frankly, it was not good on this machine. 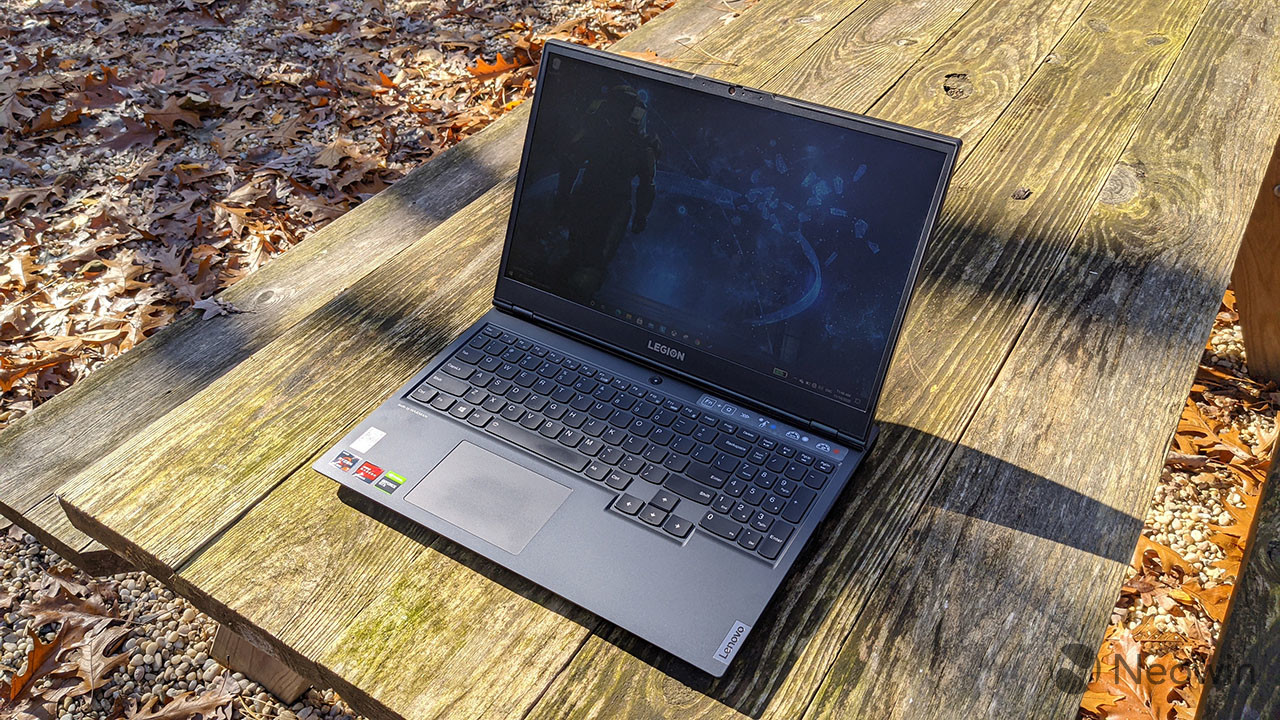 I definitely recommend getting a model with a better GPU. While Lenovo.com shows the only better option as the Nvidia GeForce RTX 2060, you can actually find the Legion 5 with a GeForce GTX 1660 Ti, which is also a solid choice.

But other than that, this is a really solid machine. As always, I love Lenovo's gaming laptops. I really appreciate the more subtle design, and I appreciate that most of the ports are in the back. Seriously, if you use this machine for a few months and then move to a gaming laptop with all of the ports on the sides, you will really feel the difference.

Personally, I think Lenovo's Legion 5 series is a solid choice for the entry-level gamer, but I do recommend a better GPU. Check out this one with a GTX 1660 Ti.