I have had the opportunity to own a range of Logitech's higher-end wireless mice over the years, both for gaming and everyday computing. I've tried to get used to the competitor mice, but the combination of hardware and software just always felt better matched with Logitech. That, and their first class customer support.

A few weeks ago my trusty G602 wireless gaming mouse decided that the wheel button would only work ~20% of the time. I used this as an excuse to get a new mouse, and I noticed Logitech had recently released a new flagship, the G900 Chaos Spectrum. 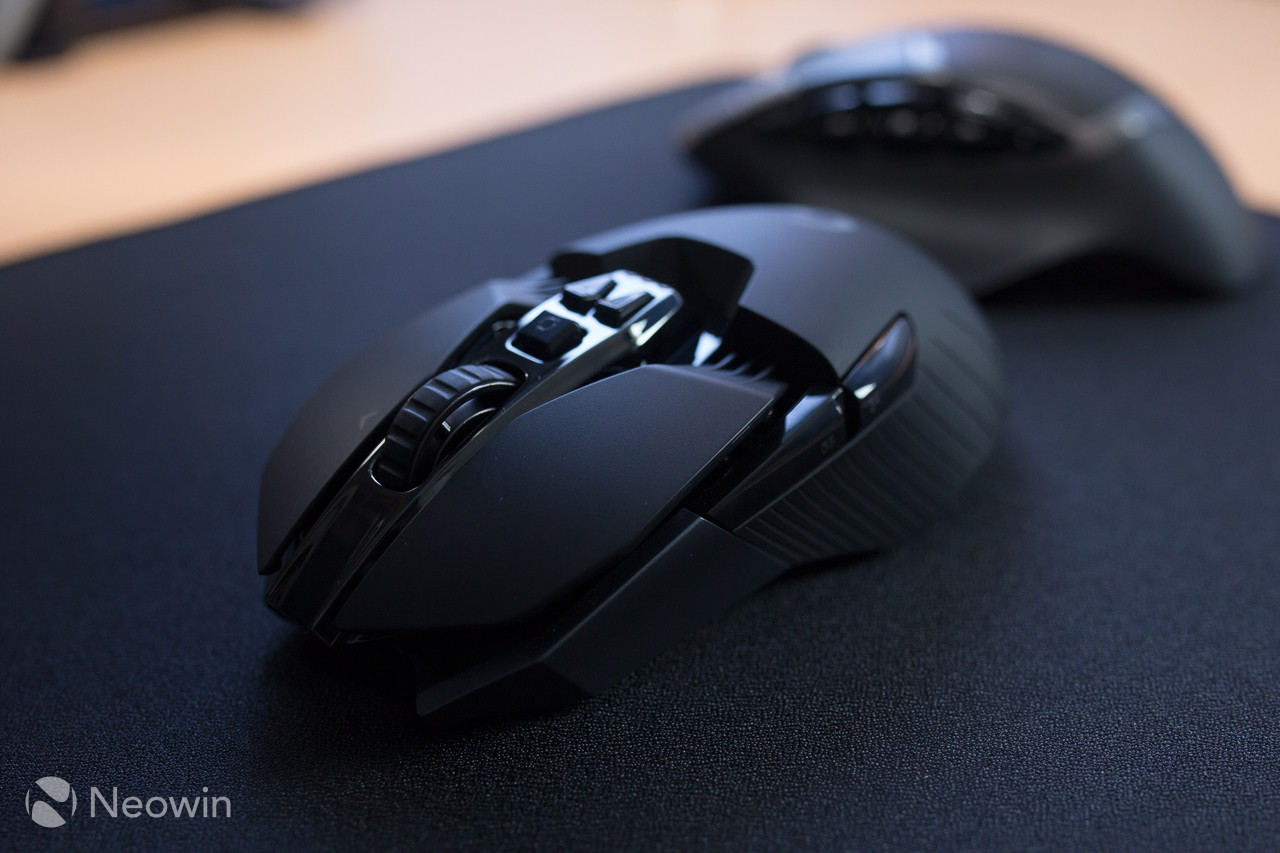 At first glance, it looks like it might change shape like a Transformer. As cool as this might have been, the angular lines and skeletal design are just styling cues. Personally, I think all this works quite well in producing a sleek and slender mouse.

The solid box that comes with the G900 is quite cool. Most product boxes are destined for the bin, but you'd probably want to keep this one kept safe. 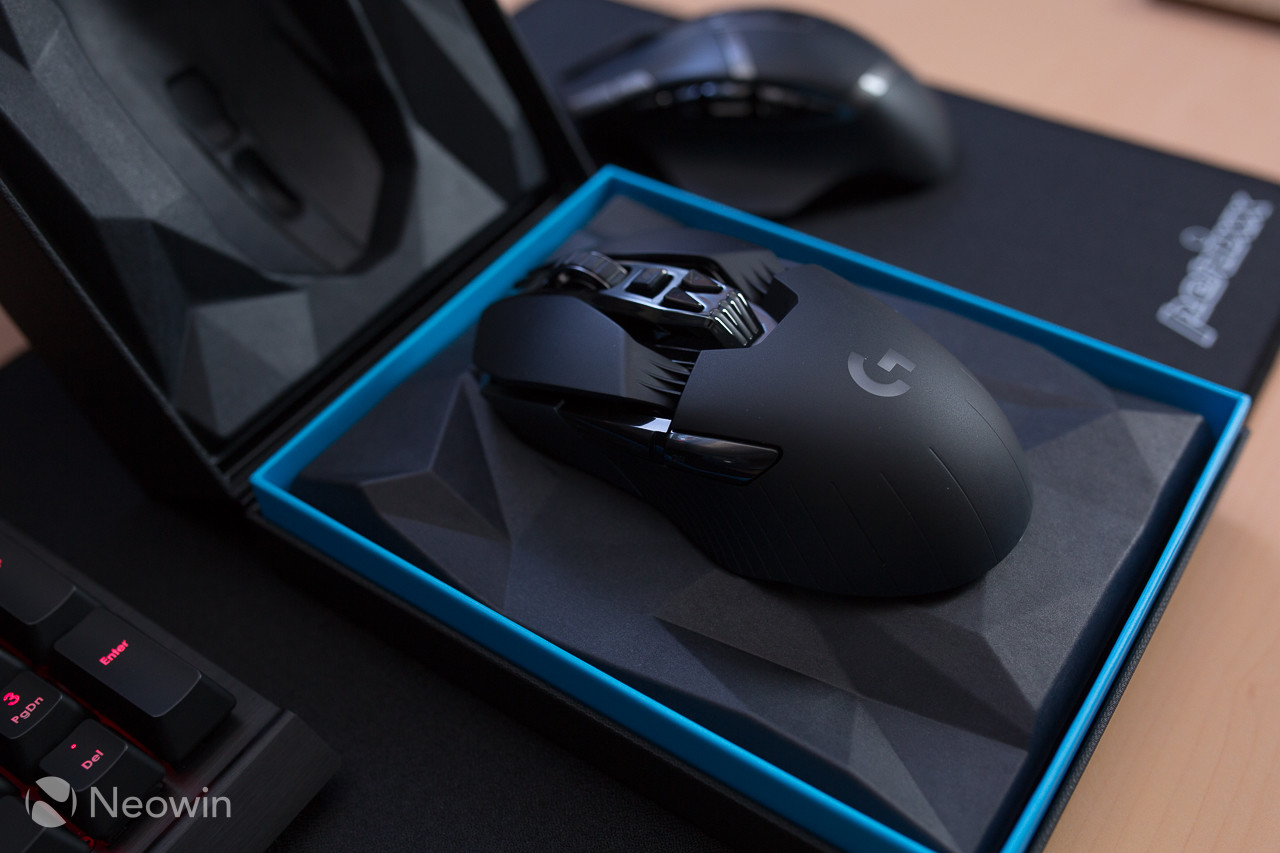 The mouse came fully charged from the factory. I was expecting to have it sitting on charge for a bit, but was pleasantly surprised.

The cable is a decent length and very lightweight. It is braided and I could not feel any unwanted friction when using the G900 in wired mode on either the gaming surface, or the bare desk. 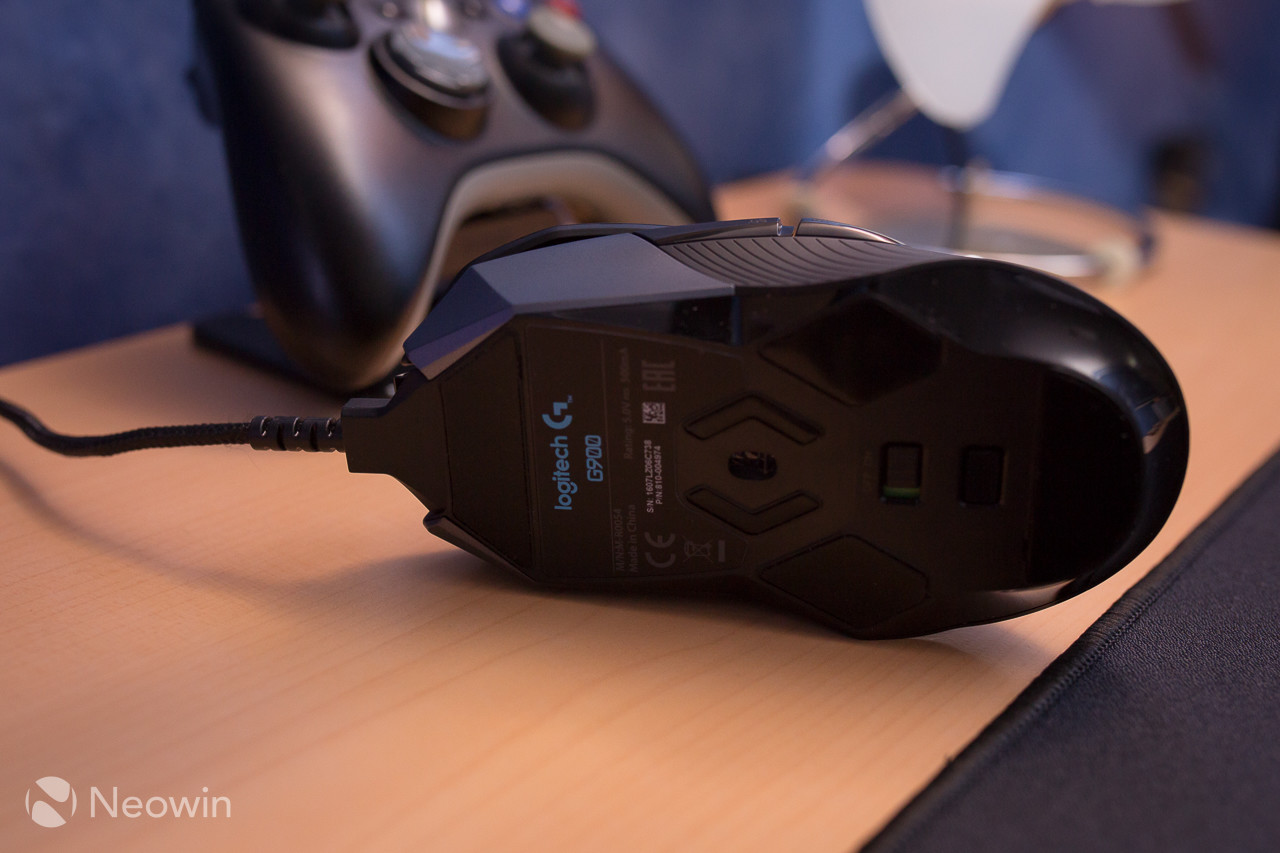 The cable end splits into a few sections revealing the individual parts that complete the link when used wirelessly. The adapter in the middle is just a simple MicroUSB to USB adapter. The idea is to be able to use the mouse purely in wired mode when the battery is low, allowing it to charge at the same time.

My only annoyance with the cable is that the Micro USB end is bespoke. It has those wings that flare out, meaning you won't be able to plug in a phone or other device to charge or transfer data. 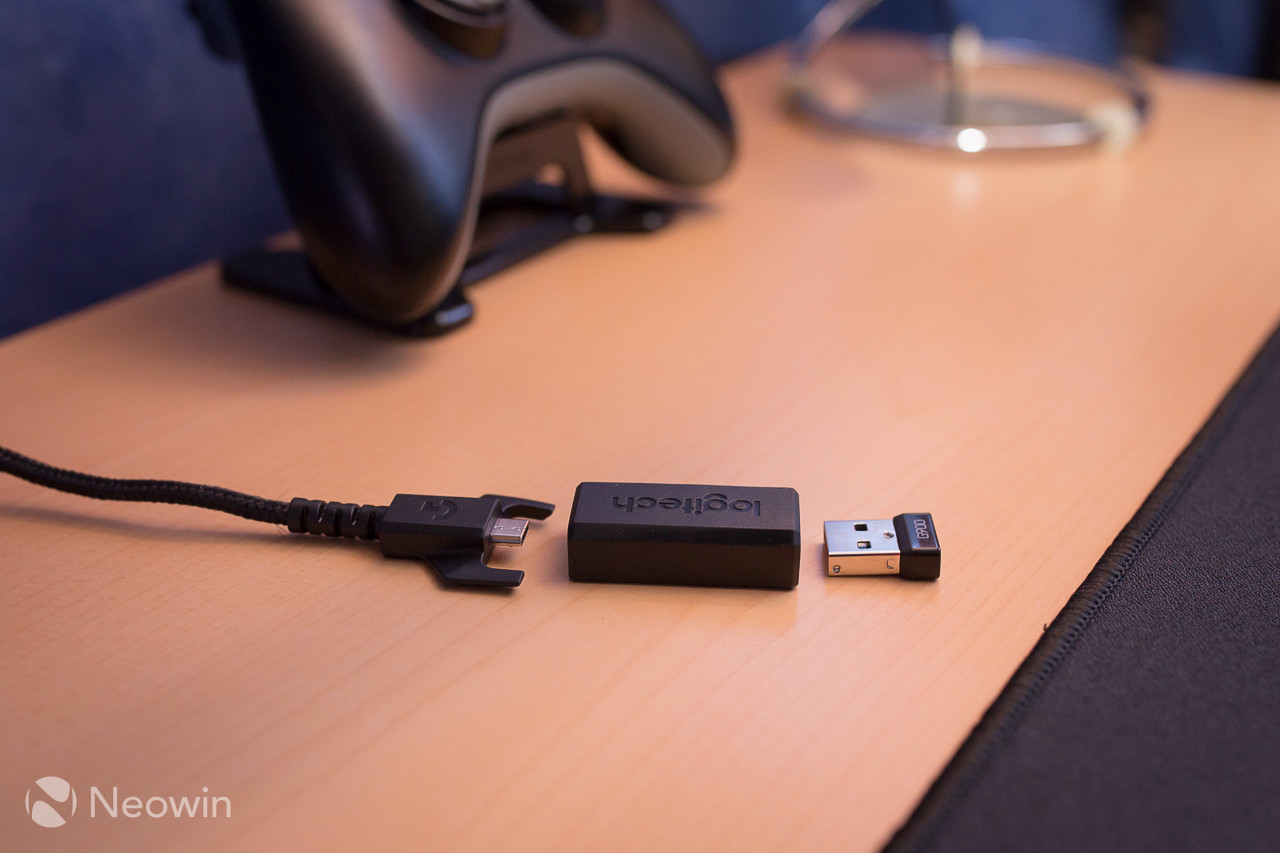 This system saves size and weight on the mouse itself, as a removable battery compartment doesn't have to be considered into the design. 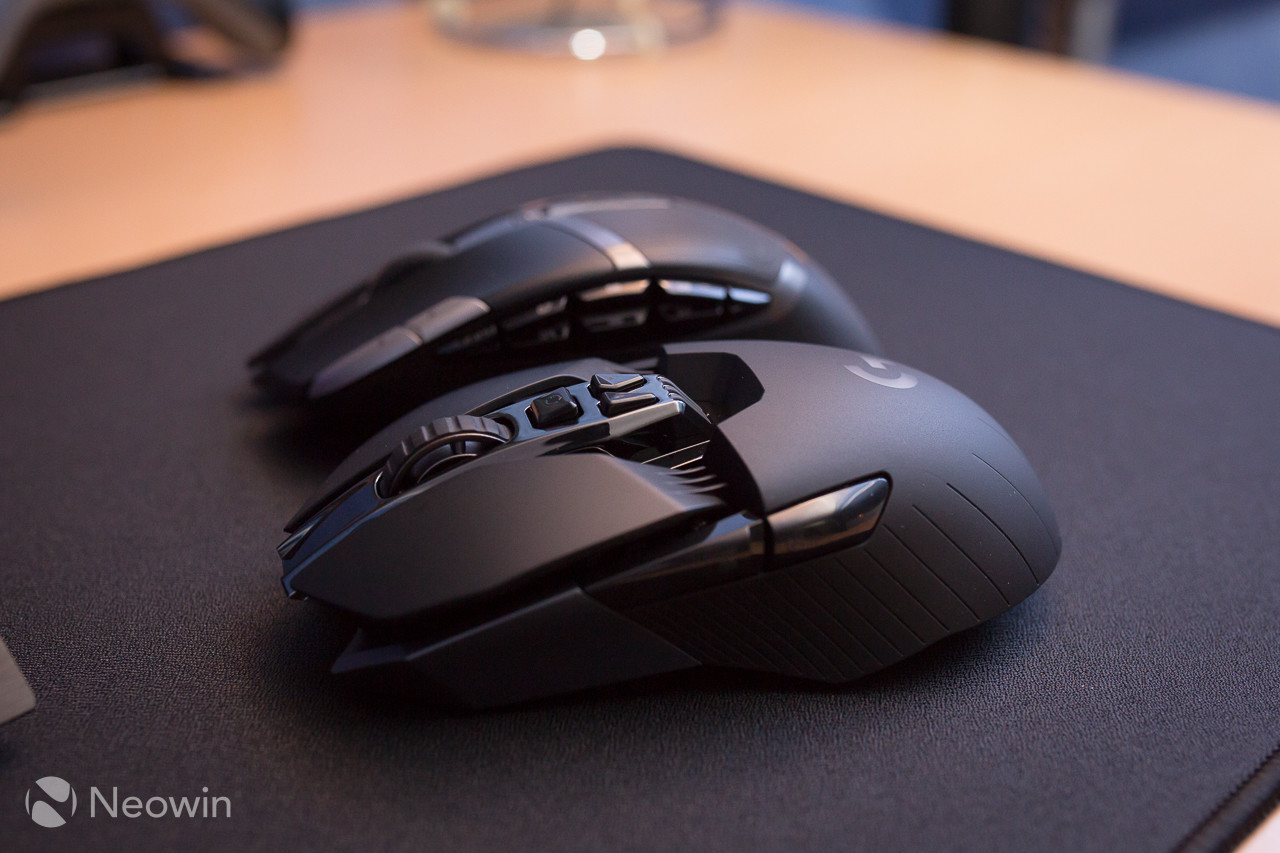 Compared to the G602, it sits several millimeters lower resulting in the palm resting flatter on the surface. It is not as ergonomic as the G602 or other models, such as the MX Master and G502. I actually found it uncomfortable for the first day as my hand had long been adjusted to the shape of the G602.

The G900 Chaos Spectrum is ambidextrous, so this plays a role in some of the discomfort mentioned. It would have been nice if Logitech made a version for each hand, especially given the cost of the mouse. 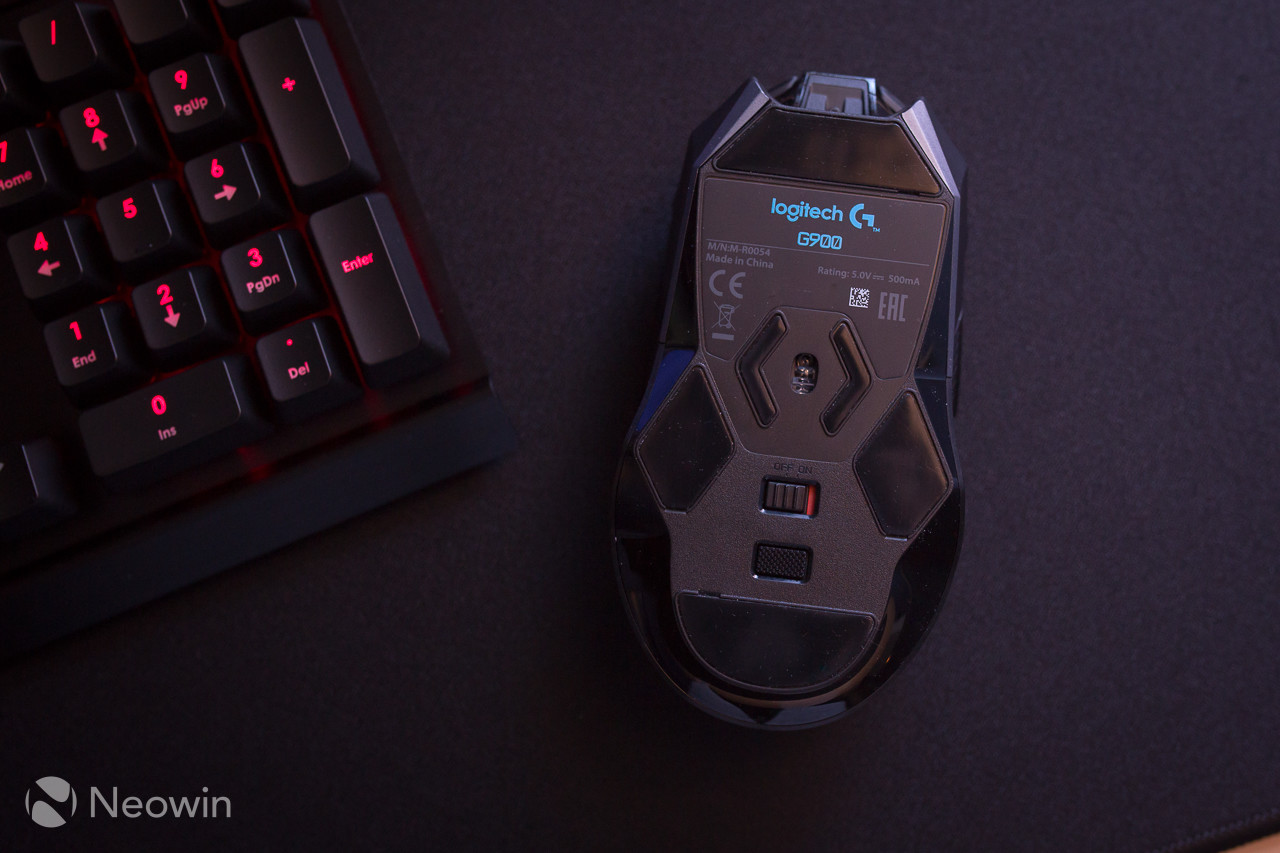 On the underside, the Teflon feet appear to be the same quality as those found on all of Logitech's modern mice. There is an on/off switch and a button below it to switch between one of the 5 customisable profiles.

No spare feet are included in the box. This is a shame, as this is the kind of mouse I can see people wanting to keep well beyond warranty expiry, by which point the feet will likely have worn away. Looking at the parts section of the Logitech website, it appears a set of spare feet sells for £4 (£13 inc shipping) in the UK, with no listing on the USA store pages.

I have watched the mouse software evolve over the years into what it is today. Plenty of things to play with and tweak. Everything is easy to understand and use.

It should be noted that while the mouse itself will work on any device that will take a USB mouse, the software is only compatible with Windows 7 and above.

The hardware is equally well thought out. Both side-grips of the G900 have a pair of buttons that can be switched on or off through the gaming software. When off, the button caps can be popped off and a blanking plate put in place. These plates and caps are secured via small magnets. 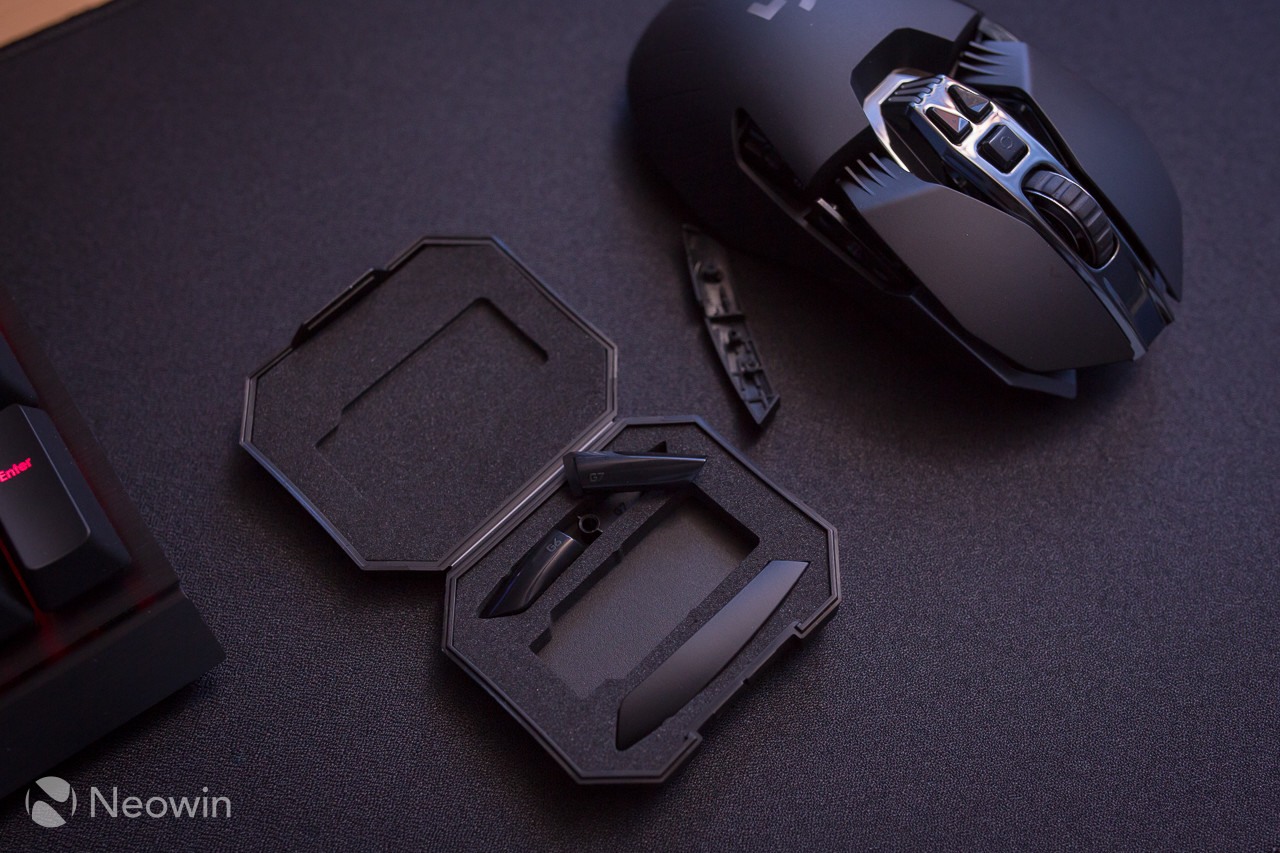 It wouldn't be a gaming peripheral if it did not have flashing lights. There are four RGB lights in total, a set of three for the DPI indicator, and one for the main logo window. Keeping these active does result in lower projected battery life. From my testing, the reported difference was about 8 hours or more depending on the LED brightness setting.

I am not a fan of lights on a mouse though, so these all stay off for me. 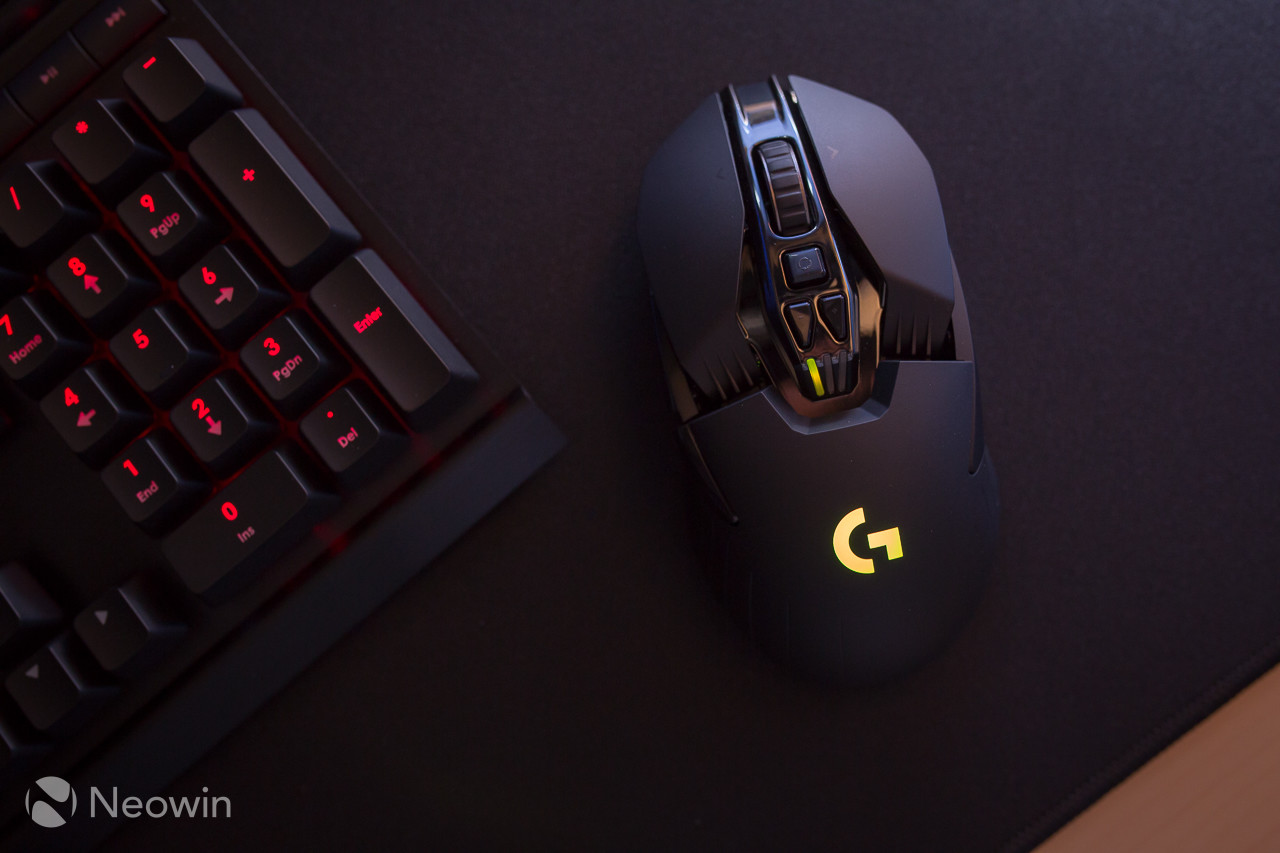 The battery life seems very good at around 5 days estimated with regular use. The software states 32 hours from a full charge; that's continuous use by the way. Speaking with other owners, battery life seems to be consistent across the board. The last serious wireless gaming mouse I had was the G700. That mouse needed to be charged every 1-2 days with moderate use.

When the juice runs low, simply disconnect the wireless adapter and plug in the cable to the G900 for wired mode while it charges. 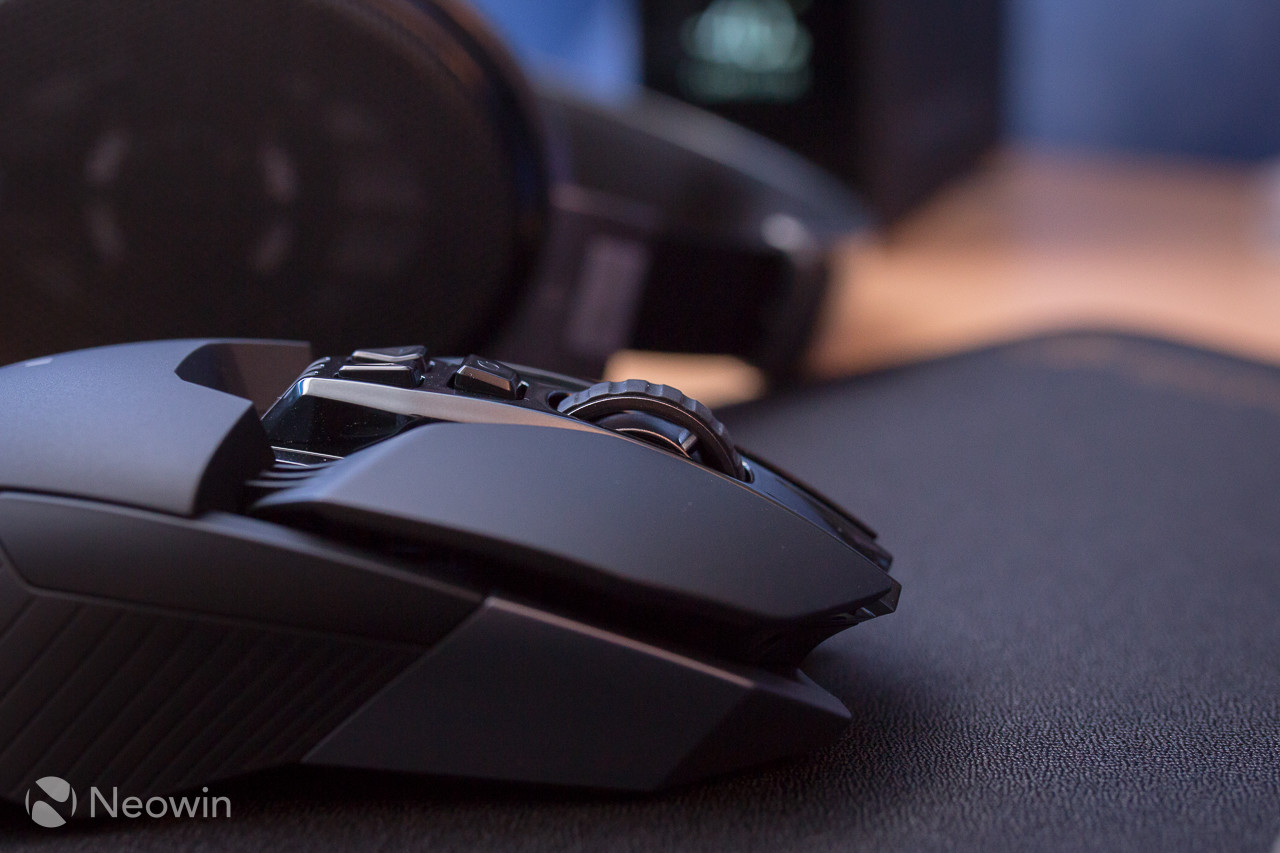 The G900 uses the highly regarded Pixart PMW3366 sensor. The same sensor is also found in the G502 and G303 gaming mice.

In either wired or wireless mode, I felt absolutely no difference in tracking performance or accuracy. This truly is a wireless mouse with genuine wired performance in any application or game. Playing the new Doom game was glorious. The fast paced action was perfect for this mouse.

In previous Logitech mice with the Hyperscroll mousewheel, I always found it awkward to side scroll as I'd end up middle clicking due to the pressure required to press the side buttons. The G700 is one such mouse where I found this to be a big problem. This is not an issue on the G900, where clicks on either side offer good micro-switch feedback. The wheel is also spoked on the inside as opposed to weighted and solid metal in previous mice. Weight savings seems to have been on the checklist when designing this.

There's no getting over the price. It's pretty damn expensive for sure, more expensive than a decent mechanical keyboard in fact. But the performance and intuitive software options make it a great mouse to use.

The G900 sits low in the palm, it isn't as comfortable as an MX style mouse which is ergonomic and made for right handed folks. It's easy to grip and easy to lift off the desk. The weight feel is also very good. It feels considerably lighter than the G602 and MX Master thanks to the slender form factor.

I feel it offers a purer experience over mice I've had in the past, even though they have all been good for games and applications too. The G900 just does it at a higher quality level.

Using a wireless mouse that is indistinguishable from a wired one is very nice indeed.