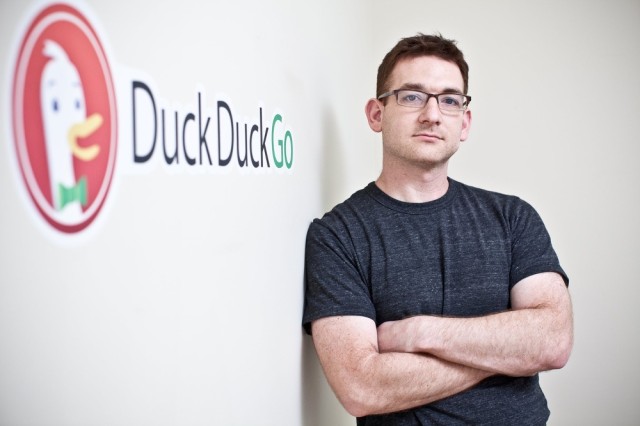 In 1998, two college friends decided to build a method of analysing every website on the Internet to find the most relevant information when a user put in a small amount of text. Their names were Sergey Brin and Larry Page, and they had just founded Google. From humble beginnings, Google has grown to dominate over 70% of the search engine market, 60% of the smartphone operating system market and has made billions and billions of dollars in the process. Google is, to some, "the Internet"; the place where you start your Internet experience. And, up until now, no-one has come close to toppling them.

Step forward Gabriel Weinberg. Back in 2006, Weinberg sold "The Names Database" to Classmates.com for around $10 million. At the time, Weinberg was in his 20s, married and had cash to spare and nothing to do with it, until he thought of DuckDuckGo. Some of you may not have heard of DuckDuckGo, as it operates quietly with very little advertisement. But DuckDuckGo is the most significant thing to happen to the search world since Page and Brin founded Google back in 1998.

While DuckDuckGo is definitely not on the scale of Bing or Google, the small, mostly self-funded startup is growing at an impressive rate. In April 2010, DuckDuckGo was receiving around 1.18 million "direct" user searches per month. Now, in April 2013, just three years later, the search engine is experiencing almost 50 million searches per month (an average of 1.6 million per day). The growth can be seen on the chart below, found on DuckDuckGo's website: 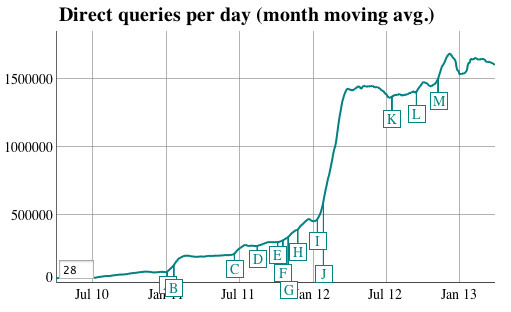 But what sets DuckDuckGo apart from Bing or Google? According to Weinberg, it's simple: Privacy. DuckDuckGo promises to never track a user's clicks, or use previous searchers to aid current results. They describe the practise of targeting results based on past searches as placing a user in a "bubble," where everything is controlled based on what you want to see (e.g. if you visit Fox News frequently, results for Fox News will rank higher than those for MSNBC). Weinberg described to me the "natural conflict" between Google's business model and their user's privacy: if Google can collect information on a user, their ads can be targeted more efficiently meaning a higher click-through rate. Weinberg told me that ad relevancy was based "on the search term typed" rather than previously searched terms. If a user types in "car" an ad for a car is the most appropriate thing to show.

Recently, Google have been attracting a lot of bad press over their invasions of privacy. People are waking up to the fact that Google can work out where they are, what they like and who their friends are, as well as a myriad of other things based on information from Android and other Google services. Weinberg said that DuckDuckGo have been mentioned in many articles about Google's dodgy privacy practices, which can only be a good thing. According to Weinberg, many "people have tried [DuckDuckGo] out for privacy reasons," but most stay because of the "superior search experience."

When users visit the DuckDuckGo homepage, they're greeted with a similar experience to Google (especially in the early days). The logo sits atop a rectangular search box with a green "Go" button next to that. There is no visual flair, like Bing, or black bar atop the screen, like Google. Weinberg told me that the point of DuckDuckGo is to deliver "best search experience possible" which "means much less spam/clutter" and "way more useful instant answers." The "useful instant answers" are helped along by DuckDuckGo's partnerships with Wolfram Alpha and various other services through short codes, such as "!wolfram" and "!gawker" (to search for a specific piece of content on Gawker). Google does offer a similar service, but it is no where near as easy and accessible as DuckDuckGo. Weinberg is also working on an app for iOS and Android, which will be available soon (something the team is "very excited about"). 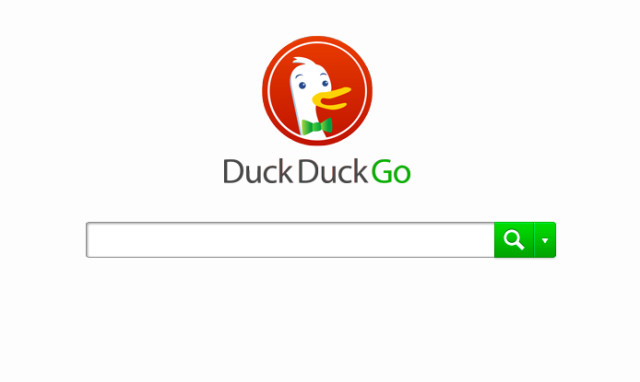 DuckDuckGo are also looking to expand DuckDuckHack, where developers can build onto DuckDuckGo. As Weinberg put it: "Any developer can create an instant answer on DuckDuckGo via DuckDuckHack.com. Think of them as add-ons for Firefox or other browsers that everyone sees!"

Of course, DuckDuckGo isn't perfect. They lack the image search ability that is present in both Google and Bing, as well as the lack of native maps search. I explained to Weinberg that these were features that I use regularly on Google, and he assured me that the team are looking to build them in "this year." However, Google is a company that has grown and developed over 15 years; DuckDuckGo is only a third of that and still has space to grow. So far, Weinberg has accepted $3 million in outside investment, as well as bankrolling the project himself. The most notable investment firm is Union Square Ventures, who invested an unknown amount of money, and described DuckDuckGo as "young and under staffed," but said that DuckDuckGo is an "interesting alternative" to Google. For comparison, Google took over $25 million in funding to get where they are today.

Another place where DuckDuckGo falls behind Google is in-site search. Large sites, like The Telegraph here in the UK, use Google search to index their own sites. Weinberg told me that site search is an area that "we haven't focused much on," but several notable sites have signed up, including Daring Fireball and Bruce Schneier, a "renowned security technologist." Weinberg told me that sites are making the switch because they "care about their user privacy and not sharing personal data with Google."

When I asked Weinberg about the success of Google, and whether DuckDuckGo could ever replicate that, he said:

Google is synonymous with search and therefore it is difficult to compete with them. In addition they have strong moats via Chrome, Android and iOS (where Google is the default most of the time). Bing has done quite well under those circumstances, with about 25% of the search market share (depending on how you count).

Many users are beginning to care about their privacy and personal data which is why users will try DuckDuckGo. Here are a couple of examples:
1) Pew Report: 65% View Personalized Search As Bad; 73% See It As Privacy Invasion
2) More than two-thirds of the Internet population across 11 countries say they would block the collection of their personal data

Ultimately though, the reason we think we'll be different and that users will stick around is the superior search experience via instant answers and less spam/clutter.

He did tell me that "Duck it" would be the replacement phrase for "Google it," which has now become a verb.

In terms of advertising, DuckDuckGo hasn't gone mad. Their most famous stunt was a billboard in San Francisco that said: "Google tracks you. We don't." A Google spokesperson replied that it was "unfortunate" that DuckDuckGo was "spreading" false information to "garner attention." The stunt worked, as the billboard has become infamous - and only cost Weinberg $7000 for four weeks. 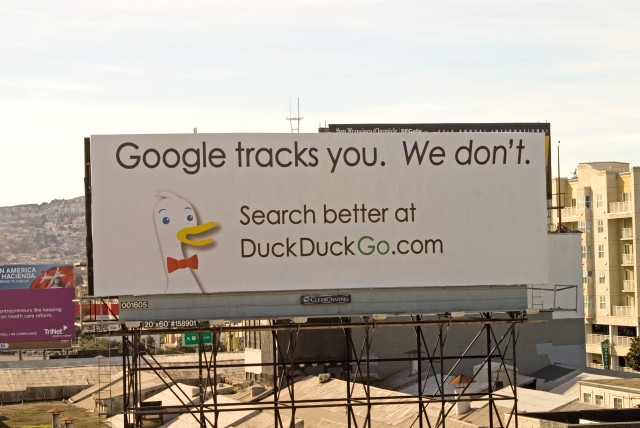 DuckDuckGo also advertises on Reddit, which has been very successful. In a blog post, Weinberg described the adverts success, saying that the Reddit advert boosted the profile of the site, especially amongst those who are privacy conscious and are willing to give another search engine a try. Weinberg said in the blog post that "people are still mentioning the ad to me." The Reddit experiment only cost $650, but has raised the profile of the site enormously in a key area. DuckDuckGo also advertised on 4chan.org, the home of all things crazy on the Internet. When asked why he chose 4chan, Weinberg replied:

Google and Microsoft have the money to run adverts on TV and in cinemas (two of the most effective advertising mediums), a luxury DuckDuckGo does not have. According to Weinberg, DuckDuckGo is open to ideas to attract more users to the search engine. Google grew through word of mouth, while Bing grew because Microsoft poured so much money into advertising it (and made it the default search engine on Internet Explorer). Weinberg said he was open too suggestions from anyone, and can be contacted here.

In terms of future plans, Weinberg would like to reach a 1% marketshare in the search space within the next five years. Bing, which was launched in 2009, has amassed a 25% marketshare, mainly due to Microsoft's deep, deep pockets; Google leads the pack with a 70% global marketshare. 1% may not seem like a lot, but would be a fantastic achievement for a company with a small budget and a small engineering team (Google currently employ over 30,00, DuckDuckGo have a team of under 10 people).

While DuckDuckGo is certainly not as big as Google, they have a large opportunity to grow and expand, delivering safe, fair and unrecorded results to anyone.