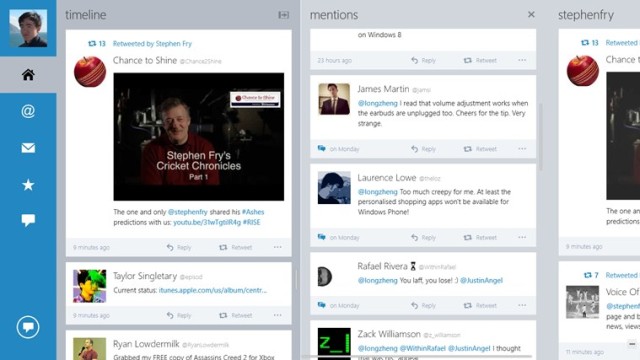 While Twitter released its official Windows 8 client in March, there were many third party Twitter apps available to download beforehand that have their own fans. One of the first was MetroTwit, created by a small team in Australia. It's been a while since the team updated MetroTwit but today a new version made its debut in the Windows Store.

The new MetroTwit has a revamped design to play with but still retains the basic multicolumn look and feel of the original MetroTwit, which should please its many fans. It also adds support for previewing inline pictures along with a number of unnamed bug fixes; viewing and managing multiple Twitter accounts still requires an in-app upgrade to MetroTwit Pro.

If you are using the Windows 8.1 Preview build, the MetroTwit Twitter feed has posted word that you will have to download a hotfix from Microsoft that will deal with an issue that prevents scrolling in XAML apps. Users are apparently finding other bugs in MetroTwit with the Windows 8.1 preview but the creators indicated in another Twitter post that they have just done some very basic testing with the preview version.

Source: Windows Store via The Verge | Image via MetroTwit