With Nokia’s commitment to make Windows Phone its main smartphone platform, it’s difficult to look at Symbian as anything but a dead man walking. But with the recent release of new Symbian smartphones, powered by the latest ‘Belle’ update to the platform, it almost seems like business as usual for Symbian.

Adding to this perception, Nokia today announced that it will be making available a series of software updates to Symbian Belle, called Microsoft Apps. Nokia describes these as business-focused tools designed to improve productivity on Belle devices. Four Microsoft Apps will be made available this year, free of charge, via the Symbian Software Update app. Microsoft Lync 2010 Mobile provides corporate IM and audio/web conferencing. 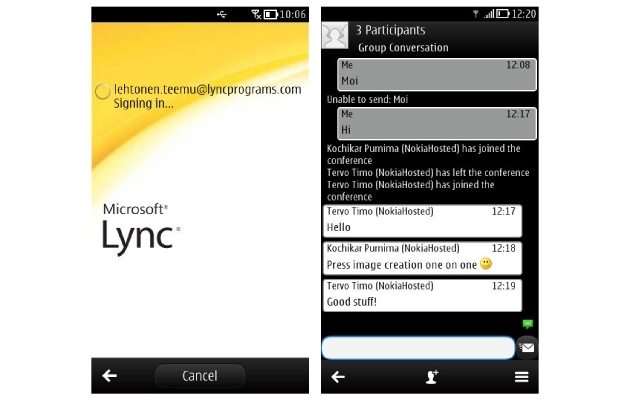 Microsoft Lync app for Symbian. Image source: All About Symbian

Microsoft PowerPoint Broadcast allows users to share PowerPoint presentations from a PC to a small group of additional devices; a link is sent to other users, and with one click, they’ll be watching a synchronised view of your presentation. Microsoft Document Connection offers a connection between mobile and SharePoint 2010 sites for documents and email attachments, while Microsoft OneNote offers an easy note-taking experience with images, and syncing with SkyDrive.

In early 2012, a further update will be made available which will allow OneNote to sync with SharePoint, and will additionally bring native Word, Excel and PowerPoint applications to Symbian.

Nokia cites these updates as “yet another confirmation that [it is] not done making investments and introducing innovation into the Symbian platform”, and promises further updates and new devices next year, while reaffirming its commitment to provide software support to Symbian “until at least 2016”. It’s perhaps a little dubious to suggest that availing someone else’s apps on your platform is an example of innovation, but for Symbian Belle users, this will no doubt be a welcome addition.