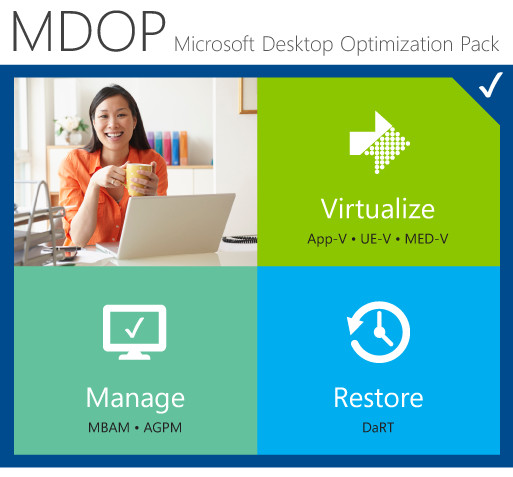 IT workers who have to work to deploy and maintain Windows-based PCs for their businesses just got some newly updated tools from Microsoft. Today, the company announced the launch of Microsoft Desktop Optimization Pack (MDOP) 2013, the latest version of the suite of software tools made for subscribers to the Microsoft Software Assurance program.

The official Windows Business blog has the details of what's included in MDOP 2013, which has Service Pack 1 updates of AGPM 4.0, DaRT 8.0, App-V 5.0, and UE-V 1.0. However, the biggest new addition is the official release of MBAM 2.0. In fact, its so big, it gets a separate and highly detailed blog post on the official Microsoft Springboard series blog.

Some of the features in MBAM 2.0 include the Self Service Portal which Microsoft says will help regular PC enterprise users perform common PC support tasks without the need to go to their company's IT help desk to fix any issues. It also automates the BitLocker encryption within a business's PC set up for Windows 8 based computers.

MDOP 2013 provides a definitive value to Windows enterprise SA customers through the enablement of flexible work environments, improved operating system capability and enhanced IT cost savings. Now, with the upgraded features available via MBAM 2.0, organizations can be more effective in how PCs are managed to ensure constant compliancy and security in any business scenario.