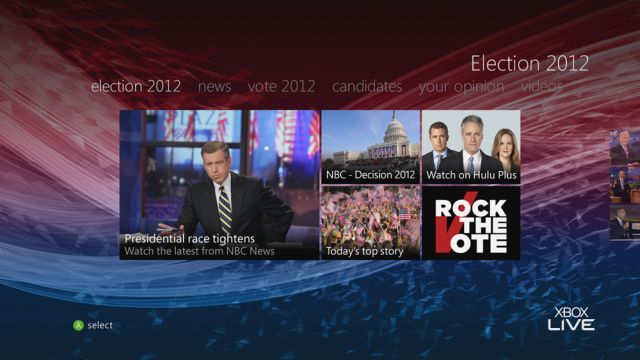 The US presidential election is rapidly approaching and starting next week, Xbox 360 owners will be able to quickly access news and information about the election via Xbox Live.

Today, Microsoft announced that it will launch its Election 2012 Hub on Xbox Live starting on Monday, August 27th, just as the Republican National Convention is scheduled to start that same week. News about the election and its candidates will be provided by NBC News.

In addition, there will be polls on the hub that will be handled by YouGov along with a way for US citizens to register to vote via Rock The Vote. In its press release, Microsoft said:

Through this innovative platform, U.S.-based Xbox Live members — part of a large, diverse and actively engaged audience of more than 40 million members worldwide — will be able to interact in real time throughout the three scheduled presidential debates, as well as enjoy live feeds from the Republican and Democratic national conventions.

Microsoft is one of the sponsors of two “Conversations with the Next Generation” youth town halls that will be held in Tampa, Florida on August 29th and in Charlotte, North Carolina on September 5th.

The survey, which was conducted June 19 to July 3, 2012, found that 40 percent are Xbox Swing Voters — those who are not firmly committed to a presidential candidate. Xbox Swing Voters say the most important issues facing the country are unemployment and jobs (39 percent), healthcare (29 percent) and taxes (22 percent).