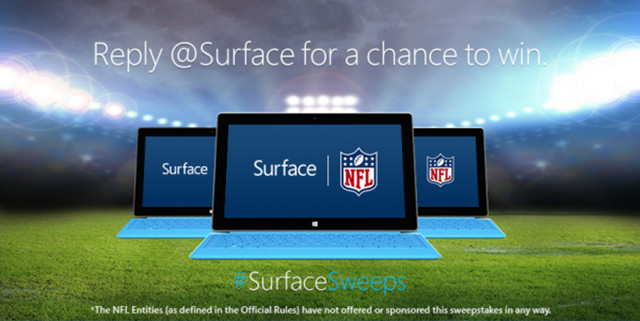 Microsoft is going all in with the National Football League in participating in the annual NFL Draft that starts later today. Today, the company has announced a new giveaway that will win one person a Surface 2 tablet that's been signed by famed New Orleans Saints quarterback, Drew Brees.

The contest, as explained on the recently revamped Surface blog, is using the official Twitter account for Microsoft's tablet product. People who live in the U.S. can participate in the giveaway, which requires they respond to the following question:

Who will your team draft in the first round tomorrow? Use #SurfaceSweeps & earn a chance to win a signed #Surface! https://t.co/sYsDhKgSlU

People have until 5 pm Pacific time (8 pm Eastern time) today to submit their answer to the question and one winner will be drawn at random to receive the signed Surface 2 tablet.

Microsoft has already announced that the official NFL app for the Xbox One will offer a live stream of this week's pro draft announcements and that it will also give fans continued updates in Snap mode while they play a game or watch TV on their console.