Nokia doesn't make its own devices these days, after selling that part of its business to Microsoft last year - but Microsoft continues to offer ultra-low-cost handsets under the Finnish company's brand name. The latest such example has been announced today: the Nokia 222, which Microsoft says is "designed to connect more people to the Internet and allow them to capture and share their world in new ways." 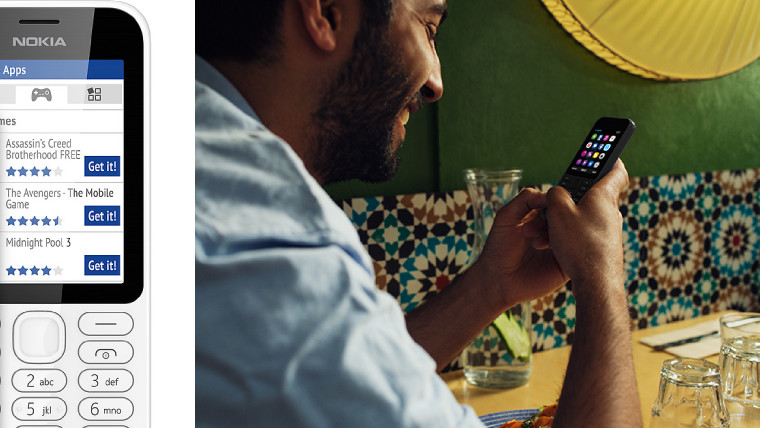 Like the new Nokia 105 that Microsoft launched in June, the 222 is a basic 'feature phone' that also offers some experiences available on smart devices, such as web browsing (over low-speed 2.5G connections), Skype, Facebook, Twitter and Messenger.

The device has a 2.4-inch QVGA (320x240px) display, and a 2-megapixel rear camera. There's also a built-in FM radio and MP3 player, along with microSD card support up to 32GB - Microsoft promises up to 45 hours of FM radio playback, and 50 hours of MP3 playback.

Even more impressive is the standby time you'll get from the battery. Microsoft says that the 1100mAh battery will power the Nokia 222 for up to 29 days for the single-SIM model, and up to 21 days for the dual-SIM variant, with both versions offering up to 20 hours of talk time.

The device also has an integrated LED flashlight - an extremely handy feature for those who live in parts of the world where electricity supplies aren't always readily available.

While Microsoft offers smartphones under its Lumia brand, those that it sells with the Nokia logo are intended primarily for the most budget-sensitive buyers in emerging markets, although many are also sold in more affluent markets for buyers seeking a low-cost back-up phone.

And like Microsoft's other feature phones, the Nokia 222 is certainly low-cost. When it goes on sale in September, it will be priced at just $37 USD (€32 EUR / £23 GBP / Rs.2,400 INR) excluding local taxes and subsidies. Sadly, though, the 222 won't be available with the usual mix of brightly colored bodywork that's normally found on Nokia handsets - it will be offered only in black and white.

You can get a quick overview on the Nokia 222 in this video from Microsoft: