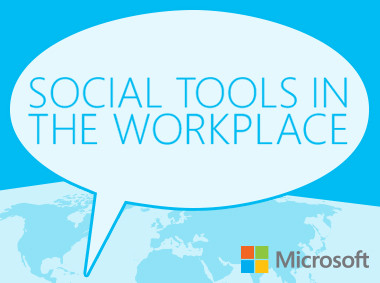 If you work in an office with a PC, there's a fair chance that your company blocks access to your favorite online social networking service, such as Facebook or Twitter. Today, Microsoft has announced the results of a new study that it claims shows that many people like to use social networks while at work and that using those services helps them do their job better.

Microsoft's press release states that the study, which covered 9,908 information workers in 32 countries, showed 46 percent of workers feel access to social networks improves their productivity while at work. The same study showed that many companies block access to such services, fearing the loss of productivity along with security concerns. However, Microsoft says that 28 percent of IT employees know of co-workers who have gone ahead and installed access to social networks at work, even when their company's PC protocols' prohibit it. More results of the study can be seen in the infographic below.

Of course, Microsoft has its own business-themed social networking service, Yammer, that is being slowly integrated with Office 365. Yammer currently has over seven million registered users. Kurt DelBene, the president of Microsoft's Office division, states that in his opinion, social networking services in business will generate as big of a boost to productivity as email did in the 1990s. He added:

As we look ahead at how collaboration and communications continue to evolve, we believe the tools people use today — email, instant messaging, voice, videoconferencing, social — will come together and be deeply integrated into apps in ways that will speed collaboration and truly transform the way people work.