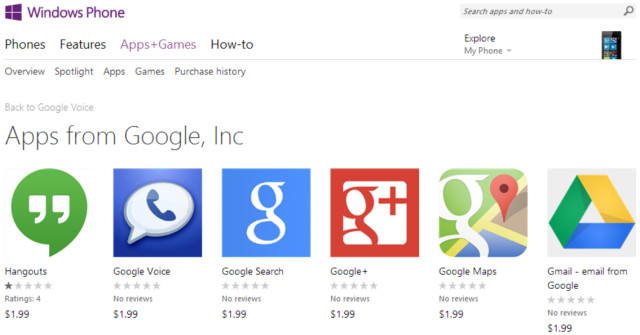 Microsoft has removed six apps that were published earlier this week in the Windows Phone Store that were made to look like they were developed and published by Google. The apps, which included "Hangouts", "Google Maps", "Gmail" and more, also had prices of $1.99 each. The real versions are all free on iOS and Android devices.

WinBeta first spotted the fake apps this week, which were all labeled as being published by "Google, Inc". So far, the only official Windows Phone app from Google is Search, which is shown in the store as coming from "Google Inc" (yes, there is no comma in the name).

The Next Web contacted Microsoft on the matter and since then the apps were all removed. In a statement, Microsoft said, "We removed a series of apps for violating our policies concerning the use of misleading information. The apps attempted to misrepresent the identity of the publisher." However, there's been no comment from Microsoft on how the apps were approved for release in the Windows Phone Store in the first place.

Microsoft has been criticized in the past for the low overall quality of apps in both Windows and Windows Phone Stores, and fake apps in the story have been a problem for a few years now. It would appear that Microsoft may need to spend some extra time evaluating which apps should be pushed in their app stores.