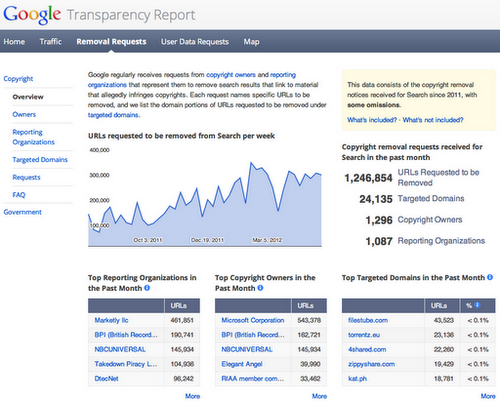 Google is now revealing to the public exactly how many requests it gets from companies that ask Google to remove website links from its search results for piracy or copyright violations. The official Google blog has announced a new page on its Transparency Report site called Copyright Removal Requests, which shows that in the last month, the company has received requests to remove over 1.2 million URLs from its search results.

Of that number, over 540,000 requests in the past month have come from Microsoft. A more detailed look at those requests show that most of them revolve around software and digital download sites, including The Pirate Bay.

Google says that the data on the Copyright Removal Request page goes back to July 2011. As you can see by the above graph, the number of requests has been increasing. The blog states, "These days it’s not unusual for us to receive more than 250,000 requests each week, which is more than what copyright owners asked us to remove in all of 2009." Google says it will be updating the page every day.

The blog also says that it will be keeping an eye out for requests that turn out to be a mistake or an effort to strike back at another company for reasons other than copyright or piracy issues. The blog states:

For example, we recently rejected two requests from an organization representing a major entertainment company, asking us to remove a search result that linked to a major newspaper’s review of a TV show. The requests mistakenly claimed copyright violations of the show, even though there was no infringing content. We’ve also seen baseless copyright removal requests being used for anticompetitive purposes, or to remove content unfavorable to a particular person or company from our search results.