Seeing as there has been much discussion surrounding Windows 8's new Start Screen - either positive, negative, or on-the-fence - Microsoft took an opportunity to give a very exhaustive explanation of some common concerns enthusiasts have with the upcoming Start Menu replacement on the latest Building Windows 8 blog post.

Besides answers to questions, they've left an interesting screenshot for users to look forward to in the upcoming beta:

​New "All Programs" view: In the Windows 8 Developer Preview, applications are listed in alphabetical order from A-Z, regardless of which application or suite they belonged to. This will change in the beta, where applications will be grouped by their "parent folder," or "program group" if you recall that terminology from the Windows 3.x days. 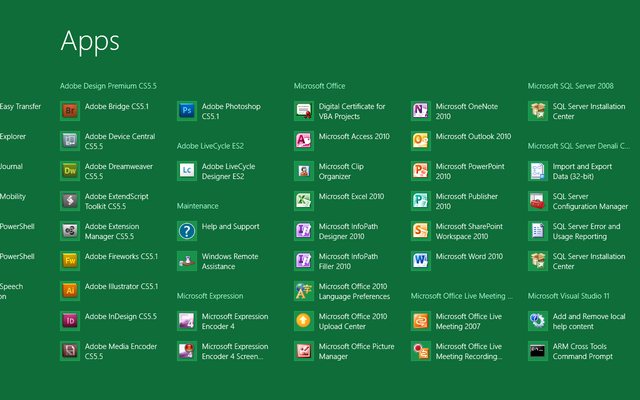 Compared to the current All Programs view for Windows Vista and 7, this new solution keeps the parent-level folder as with previous Start Menus in Windows. As seen in the above screenshot, all Office 2010 applications are grouped together.

One noticeable change for existing applications of today is that child-level folders will be promoted up to the parent level. With Office 2010 as an example, on older versions of Windows the "Upload Center" icon would normally be under a "Microsoft Office 2010 Tools" subfolder in the Office 2010 group. This change should not come as a surprise, given that Microsoft has encouraged developers to move away from nested folders in the transition from the cascading XP menus to the flat Vista and 7 folder list.

Another change made from the Developer Preview is that the "Search" charm will now essentially act as a "All Programs" link, taking users to an expanded list of their applications upon activation.

​​But what about Fitt's Law for the new Start Screen? Users have noted the extra mouse travel time given a large launching surface for applications. While Microsoft acknowledged the extra mouse travel distance in the Start Screen versus the Start Menu, they also point out that Fitt's Law also takes into account the size of the target, in addition to the distance. The distance to reach the target may have increased, but the larger size of the tiles compensates for the lost time.

Microsoft hopes that the live tiles on the Start Screen can save users time by presenting information without requiring an app launch, and that users can locate buried applications on their system faster by presenting them with large icons, relying on spatial memory (location of a tile relative to a 'shape') and colours of a title/icon to help speed up the launching process, as opposed to digging through a list of primarily text links.

The following two heat maps present Microsoft's argument for the time required to launch a user's favourite applications. They compared users launching the Start Screen and selecting a favourite tile, with users selecting a pinned application from the Start Menu. Boxes in green represent a shorter launch time, with longer durations in red. 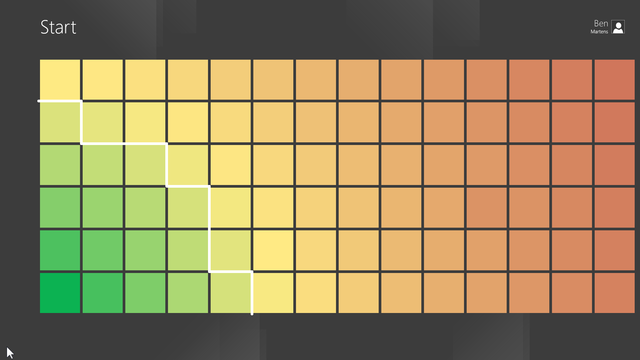 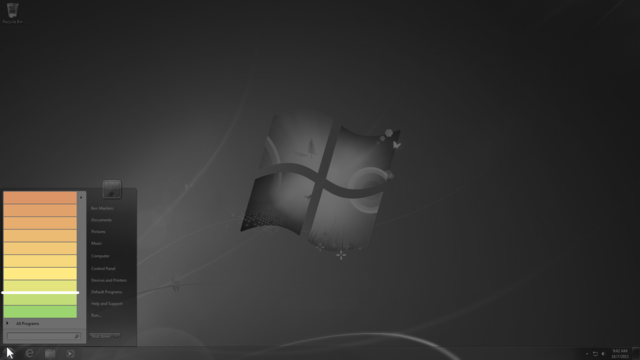 These heat maps show a larger number of tiles that can be quickly accessed by a user launching the Start Screen from the lower left corner, compared to a default number of 10 pinned applications in the Start Menu.

Finally, what about jump lists? While touted as one of the most interesting new features for Windows 7, its use has not approached the same level as that of the new revamped taskbar. 20% of recorded user sessions had activated jump lists from the taskbar, compared to just 1.2% of sessions for jump lists invoked from the Start Menu.

Given the new Start Screen, jump lists from the Start Menu will no longer be an option, but Microsoft will keep jump lists intact for users who prefer the file-centric launching model that current versions of Windows presents. Microsoft hopes that live tiles, which can be pinned from any part of a modern Metro application, will in time wean users away from a file-centric user experience to that centered around services.