The year is gradually drawing to a close, which means that we’re entering the season of annual retrospectives. Microsoft kicked things off today with Bing Trends 2014, a site that takes a look back at some of the most popular Bing web searches from around the world over the past year.

The site lists the top ten searches for a variety of interesting categories. For example, in the US, the most popular searches for tech devices on Bing in 2014 were:

It’s no surprise that Apple’s iPhone 6 tops that list, with its iPad in fourth place. But it’s interesting to see three of Microsoft’s products in the list too: the Xbox One, the Surface Pro 3, and Windows Phone. Fans of Windows Phone - along with Microsoft itself, one imagines - will no doubt be encouraged to see the mobile OS among the most searched-for terms of the year. 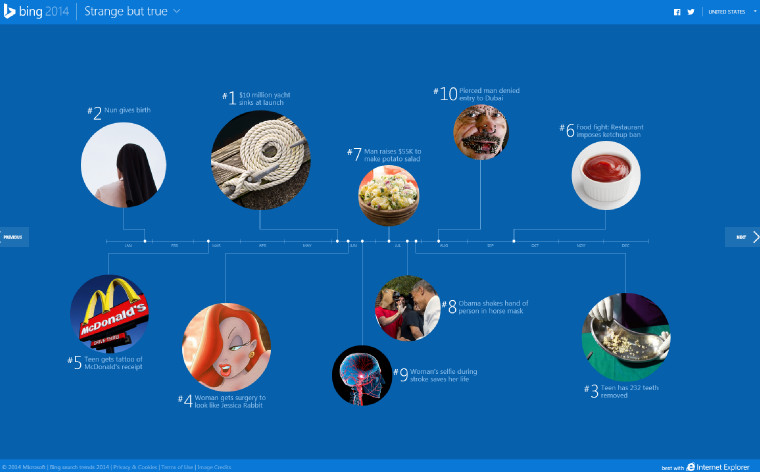 There are plenty of other categories to explore too. For example, the five most searched-for sports teams on Bing US in 2014 were:

There are entertainment categories too, such as the top movie searches:

In addition to being able to browse top searches by category, you can also view them for different countries around the world. In the UK, for example, the top news-related search was for retired Formula 1 driver Michael Schumacher, who sustained a serious head injury while skiing.

In Australia, the Samsung Galaxy S5 made it into the top ten electronic devices searched for in 2014. In France, the most searched for international destination of the year was Morocco.

Anyway… Bing Trends offers plenty of different categories to browse through (although some countries have fewer categories than others), and if you click on any of the images within a category, you can find out more on that particular subject through a Bing search.

Oh, and apparently, the site works “best with Internet Explorer” – although it seems to work just fine in Chrome and Firefox too.