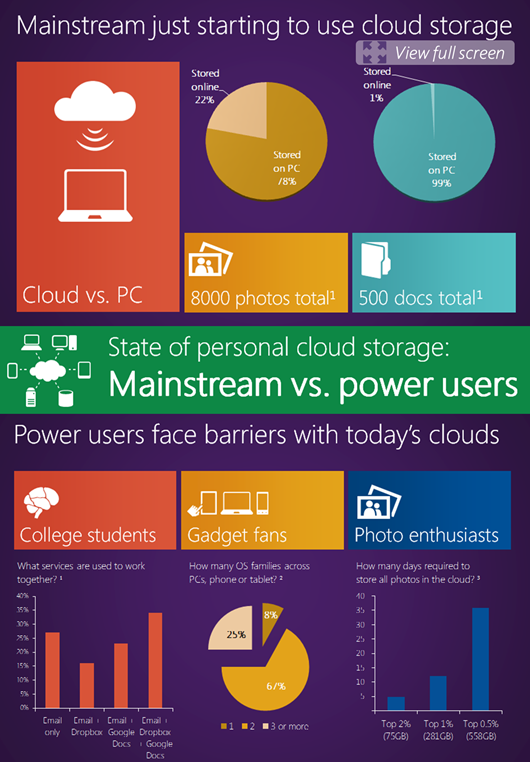 Microsoft's SkyDrive cloud-based services are competing with a number of other companies that offer similar services such as Amazon, Google, Dropbox and Apple's new iCloud. In a new blog post today on the Windows Live site, Omar Shahine and Mike Torres. the group program managers for SkyDrive, take a look at the status of cloud-based services in general and how Microsoft sees these kind of services evolving in the future.

The blog post states that about 17 million people store content on SkyDrive every month with 360 million files being uploaded and shared every month. Five million different devices are connected to Skydrive every month. However as you can see from the graphic above, the vast majority of documents and photos are still stored on PCs.

Microsoft sees three different kinds of cloud services. One is what they call "file clouds" which mirror the kinds of file design that are found on PCs. Microsoft considers SkyDrive, along with Dropbox, to be a "file cloud" type of system. Another is "device clouds" which hides the basic file structure from the user in order to allow people to use them across several devices. Apple's iCloud is considered to be in this category. Finally there are "app clouds" where you download an app to access content from a cloud server. Netflix, OnLive and Spotify are all considered to be in this type of system. Microsoft's blog entry says, "Each category enables specific outcomes for its users. Each of these has its strengths, and we think that they’re all interesting."

Microsoft also sees three kinds of "power users" for cloud services. One are college students who need to collaborate with other students and teachers and may need to share files with them. Another are "gadget fans" who want to link files across their smartphones, tablets and PCs. Finally there are photographers who take lots of pictures and want to be able to store them on a cloud service.

Microsoft believes that for future cloud features, they should add ways to make storing files simple as well as making them secure, have a certain amount of storage space that can be used for free and can be accessed from most any Internet connected device. Cloud services should work well with apps like email and photo programs and be accessible from any PC.

Microsoft states, "We know we have a ways to go to deliver a cloud that seamlessly connects today’s files with tomorrow’s modern device and app experiences. We will measure our progress in meaningful releases that address feedback and bring us closer to our vision."