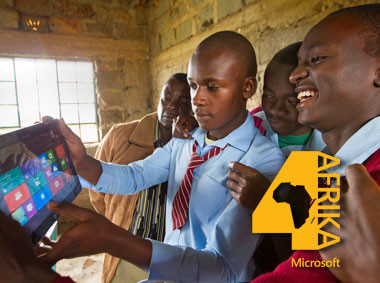 Microsoft is launching an effort in parts of Africa to help students gain access to PC hardware and the Internet through a program called the 4Afrika Initiative. Today, the company announced that a number of college students in Tanzania will benefit from Microsoft's efforts.

The company's press release states that the tens of thousands of students who attend The University of Dar es Salaam in Tanzania will be able to purchase Windows 8 hardware and services, along with Internet access that will use the TV white spaces method. White spaces allows for data to be transmitted at long distances via unused portions of the television wireless spectrum.

Microsoft will also be hiring a number of students at the university to serve as support staff for the company's Internet and Windows 8 services. Microsoft is working with UhuruOne, the local ISP, on this project, and banks will also offer small loans to cover the costs of these services.

Microsoft earlier announced a similar project in Kenya which also used TV white spaces combined with solar power to provide Internet services to people who would normally not have that kind of access. Paul Garnett, director at Microsoft’s Technology Policy Group, stated:

White spaces technology and efficient spectrum management have a huge potential for expanding affordable broadband access throughout the world. We hope all governments will follow the example of forward-looking countries like Kenya, Tanzania and many others that have taken steps to support deployment of white spaces technology.