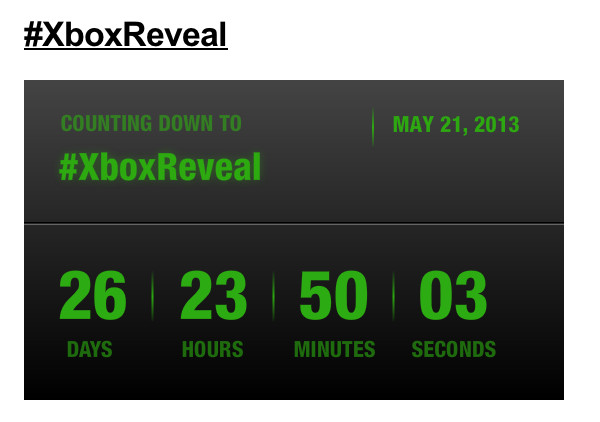 Microsoft is preparing to unveil the next Xbox on May 21st according to a post by Major Nelson and the countdown has officially begun to see what Microsoft has been working on for the past few years.

According to Major Nelson,

On Tuesday May 21st, we’ll mark the beginning of a new generation of games, TV and entertainment. On that day, we’ll be holding a special press event on the Xbox campus and we invite you to join us via the live global stream that will be available on Xbox.com, Xbox LIVE and broadcast on Spike TV if you are in the US or Canada.

On that day, we’ll share our vision for Xbox, and give you a real taste of the future. Then, 19-days later at the Electronic Entertainment Expo (E3) in Los Angeles, we’ll continue the conversation and showcase our full lineup of blockbuster games.

The event will be held on Microsoft's campus but will also be streamed worldwide.

We know that Microsoft has been working on the console for some time and we have seen quite a few leaks about the platform including the specs of the device and the infamous 'always on' connection saga. In addition to many other leaks including an HDMI-In option, we are certainly excited to see what Microsoft has up its sleeve for the next gen device.

Microsoft is certainly looking to capitalize on the success of the current device and we suspect will be looking to make a play at turning the device from a gaming focus, to a media center powerhouse in the living-room. We have already seen this transition in the current device and it would make sense for Microsoft to extrapolate on this movement.