Microsoft is now claiming that it didn't know the details about a recently unearthed contract to promote the Xbox One on YouTube in a partnership with Machinima. A few days ago, the contract was leaked online, which revealed that Machinima offered its YouTube channel partners an additional $3 per thousand views if they showed at least 30 seconds of Xbox One gameplay footage. 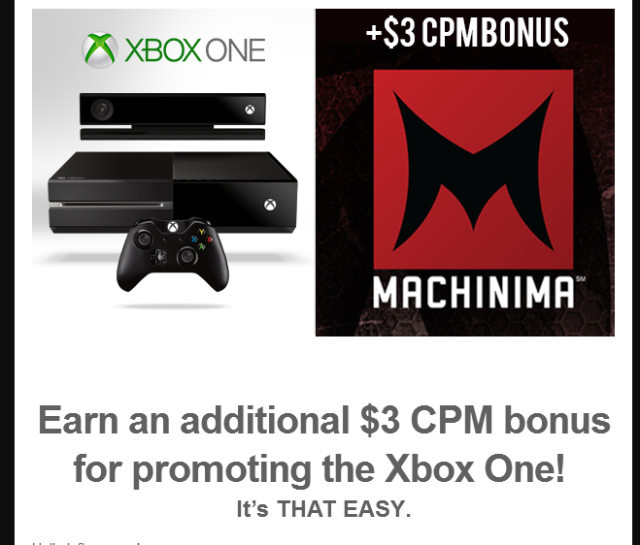 The videos must not "say anything negative or disparaging about the Xbox One or any of its games" and the deal itself must remain a secret, according to the contract. Earlier on Tuesday, Microsoft and Machinima sent out a joint statement to media outlets claiming that the Xbox One promotion was a "typical marketing partnership" and that the company was not reviewing the content of the YouTube videos. Microsoft also said that the contract was not intended to keep the video creators from stating they were being paid to promote the Xbox One.

However, just a few hours later, Microsoft sent another note on its own that put much more distance between itself and Machinima on this matter. GeekWire reports that, according to the company's new statement:

It would appear as if Microsoft doesn't want to be linked to this deal, especially if the Federal Trade Commission decides to investigate the partnership. Many people believe the Machimima contract could violate FTC regulations that require Internet content creators to reveal if they are being paid to promote products.