Despite near-universal praise from reviewers, bloggers and consumers who have used it, Windows Phone hasn’t exactly taken the world by storm yet. However, there's still a lot of talk out about 2012 being “Windows Phone’s year”, and the arrival of Nokia’s new handsets will undoubtedly help the hardware and software ecosystem grow.

Before the end of the year, two significant updates to the Windows Phone OS are expected – the first, known as Tango, will be a relatively incremental update that’s expected to bring new features for developing markets, including support for as many as 120 new languages; the second, referred to internally as Apollo, but expected to be called Windows Phone 8 when it arrives towards the end of the year, will be a much larger and more comprehensive update.

In a video produced by Microsoft to be shared internally and with its hardware partners - and seen by PocketNow - Joe Belfiore, senior vice-president and Windows Phone manager, revealed a number of details about Windows Phone 8. 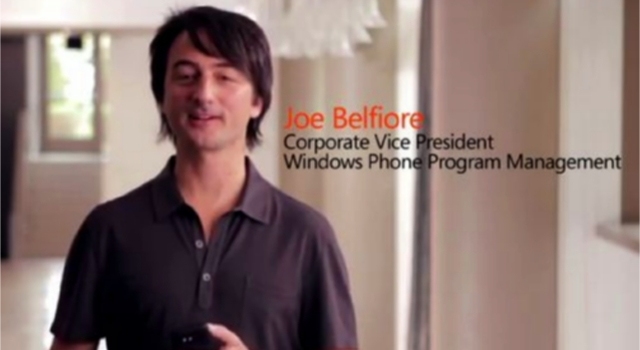 One of the key criticisms about the current Windows Phone ecosystem is the strict set of guidelines that Microsoft has established for phone handsets, which allow few opportunities for manufacturers to differentiate on a hardware level. The Android ecosystem is filled with screens of all resolutions and sizes, multi-core processors and any number of other component variations, while Windows Phone handsets are all relatively similar on the inside.

Joe Belfiore explains in the video that Windows Phone 8 will bring a much greater range of hardware configurations; “scale and choice” of hardware is a key focus here. There will be support for four additional screen resolutions (the exact resolutions were not specified, but we’d hope to see both lower and higher, and perhaps even HD, resolutions supported), as well as support for multi-core processing and for removable microSD cards.

As we expected, NFC will also be baked into Apollo, bringing capabilities for what Belfiore calls “the wallet experience”, to allow consumers to use their device for contactless payments, and tap-to-share experiences with other devices, such as phones, tablets and PCs.

As we know, Microsoft is extending its Metro user experience to its next-generation PC operating system, Windows 8, but the connection between Windows 8 and its mobile counterpart will go further than just look and feel. There will be major software commonalities and ‘overlap’ between the two, allowing software developers to “reuse, by far, most of their code” in developing apps for both PC and phone. Kernel, networking stacks, multimedia and security features are identified as areas of significant commonality.

Windows Phone 8 will no longer rely on the Zune PC software to manage synchronisation between the phone and computer; instead, it seems, there will be a more closely integrated sync solution that will allow WP8 and W8 devices to connect and share data. Belfiore identifies the example of having your music collection instantly synchronised to a new Windows Phone 8 device via improved SkyDrive integration, without having to manually synchronise the handset with the PC.

Further integration is promised with the Xbox Companion app, which gets its own Windows 8 version. By the time Windows Phone 8 arrives, Microsoft believes that there will be around 100,000 apps available in the Marketplace (having reached 60,000 apps just a couple of weeks ago). Native code support will make it much easier for apps to be ported from other platforms such as Android and iOS, as well as offering greater support for more powerful apps.

Skype, now part of the Microsoft family of course (and coming soon to Windows Phone 7.5 as a non-native downloadable app), will be integrated into the Windows Phone 8 OS via a new and improved Skype client; although Skype will remain a separate app, it will 'hook' into the OS to allow Skype calls to be placed with the same ease and direct access with which one can currently make a ‘traditional’ non-VoIP call. This kind of integration is a development of the Windows Phone App Connect and Windows 8 Contracts features, which allow the OS and individual apps to interact with each more seamlessly.

A redeveloped camera API will see Microsoft provide a ‘basic camera interface’ which OEMs can skin or add to with viewfinders and other third-party plug-ins. An example given is of a so-called ‘lens app’ that can combine burst mode with smile detection to enhance the quality of the snap.

DataSmart is a new feature that aims to drastically simplify the way data is used and managed. Windows Phone 8 will actively afford precedence to wi-fi connections wherever available, automatically connecting to carrier-aligned wi-fi networks if they are in range. Data usage can also be monitored at a glance with a live tile. Much of this functionality was revealed in its preview of the Windows 8 mobile data experience, which we covered here on Neowin a couple of weeks ago.

Internet Explorer 10 on Windows Phone 8 will use a proxy server to feed compressed pages to handsets to reduce the amount of data required to serve web content; in this case, it’s claimed that data consumption can be reduced by 30%.

One criticism levelled at Windows Phone is the lack of ‘hardcore’ support for enterprise and business environments. In an effort to address these concerns, Windows Phone 8 will offer integrated 128-bit BitLocker encryption, as currently found on some Windows PC operating system versions.

Businesses will also be able to deploy their own proprietary software directly to handsets, behind their own corporate firewalls, without having to submit to the public Windows Phone Marketplace.


Images of Joe Belfiore via SmartKeitai.com and Metro.co.uk