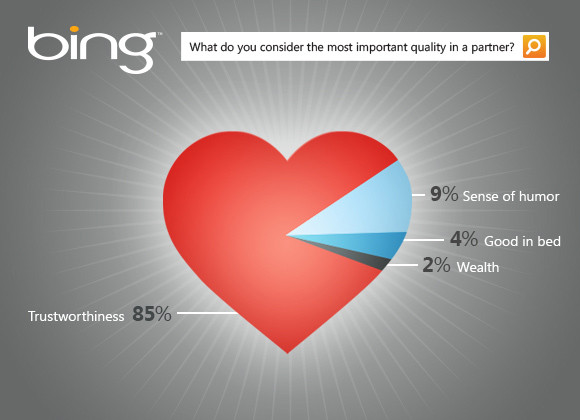 During the Christmas season, Microsoft used the "Scroogled" theme to attack Google for showing search results that were paid for by merchants when people searched on Google Shopping. Now that Valentine's Day is near, Microsoft is at it again with a new survey that ties into how it thinks people should trust Google.

Microsoft's press release stated that the company conducted an online survey of 1,017 men and women, aged 18 to 34, and asked them what they considered to be the most important quality for a partner. According to Microsoft, the survey results show " ... a whopping 85 percent of people report that trustworthiness is the most important trait in a mate, beating out good in bed, sense of humor and wealth."

Microsoft used the survey result as their way to ask people to "break up" with Google, picturing them as an untrustworthy and bad lover due to their paid Google Shopping results. It also tries to show that Bing is a better "partner" for users due to factors such as its ability to keep up with your friends via its links with Facebook and even using its Bing Rewards program to get gifts just by searching on the service.

Hopefully, Bing won't be the kind of romantic partner that convinces us that our current relationship is bad, only to turn around and show us another face entirely, like a bad Lifetime movie.