A leaked product update status report from Samsung has revealed that five of its mid-range smartphones will be receiving the KitKat update this month. 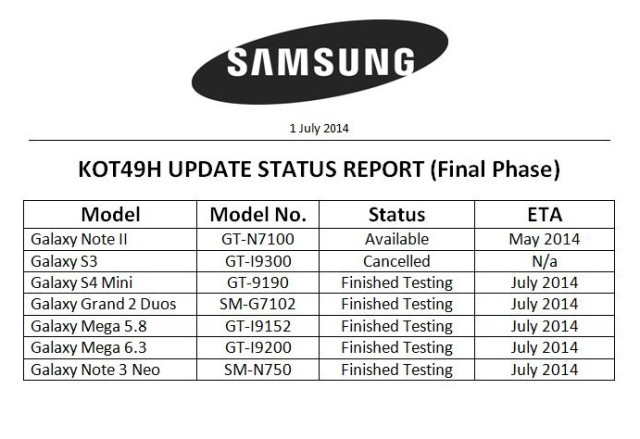 In the month of January, a similar leaked report had revealed the update details for Samsung's flagship devices such as the Note 3 and Galaxy S4. Now, the latest leak mentions the availability of the KitKat update for the mid-range smartphones and phablets from Samsung such as the Galaxy S4 mini, Galaxy Grand 2 duos, Galaxy Mega and Galaxy Note 3 Neo. Although, no specific dates can be found, Samsung generally rolls out updates over a period of time in phases across the world and may take some time to hit devices in specific countries.

The previously leaked report had mentioned that the Galaxy S3 would be receiving the KitKat update between March and April. However, Samsung officially announced the cancelation of the update for the international version of their ageing flagship from 2012. It seems, however, that the company continued to test the version of Android for the device, prior to this leak. The latest update for the Galaxy S3 was Android 4.3, which was released in November 2013.

It should be noted that the Snapdragon-based Galaxy S3 with LTE available in the United States has started receiving Android 4.4 as an over-the-air update.