Mozilla announced on their blog today that Mozilla Firefox 4 Beta for Mobile devices is now available for the general public to use, after early alpha testing of Fennec proved to be a success. 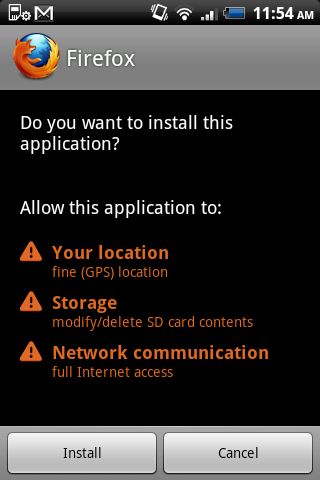 The Firefox 4 Beta attempts to bring Mozilla's mobile offering in line with the desktop browser and the team says that the major focus of the beta was speed and responsiveness -- if you were a tester for the Fennec Alpha, you would know how slow the browser performed -- Mozilla has aimed to make the browser as quick as possible with some large architecture changes.

The beta includes Firefox Sync with desktop versions of Firefox (either through the sync extension or the built in sync in Firefox 4), offers multi-touch, the awesome bar (much like on the desktop browser) and also offers a new feature; The "Awesome Screen" which "instantly gives you access to your recent history, bookmarks and tabs just by tapping in the Awesome Bar."

Firefox 4 Mobile Beta also includes support for HTML5, CSS and Javascript, as well as being the first mobile browser to support add ons. Firefox 4 beta 1 is available for download on the Android platform (2.0 and higher) and on the Nokia N900.

Update: A bit of a warning, when this was tried here at Neowin, our test device (HTC Legend) boot looped and lost all apps installed on the SD card. Also, you won't be able to install this one unless you've got 53MB of spare internal space. Tread carefully.