While some may believe they're invulnerable on their computer, a new threat has surfaced which specifically targets Mozilla's Firefox browser. Obviously computer threats have been a common problem since the dawn of the world wide web, however scareware such as this is significantly more rare. Instead of portraying itself as a company and placing a popup on the user's computer, this scareware threat pretends to be Mozilla Firefox itself protecting you from a threat. 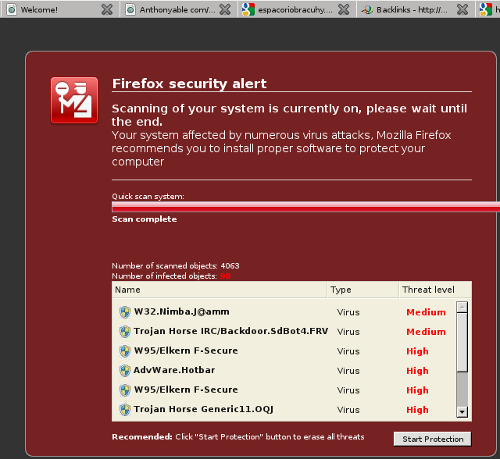 Over at The Windows Club, they've reported that clicking on the start protection button as displayed in the image above, installs a program on the user's computer, picks up a fake virus during a supposed scan and asks the user to pay $80 in order for the program to be able to remove the virus.

As time has moved forward, scareware has become a more prominent threat particularly due to the lack of technical knowledge that most computer users have. Having a specific target audience is not a new concept though as we've seen with money phishing emails which rely on the recipient to be associated with that banking corporation.

Obviously the word of advice on this to anyone surfing the internet and getting messages the same or indeed similar to this, is to be careful on what you click on. Firefox is not equipped with a virus scanner itself so if you see something like this, close the browser and conduct a quick scan just to be sure.