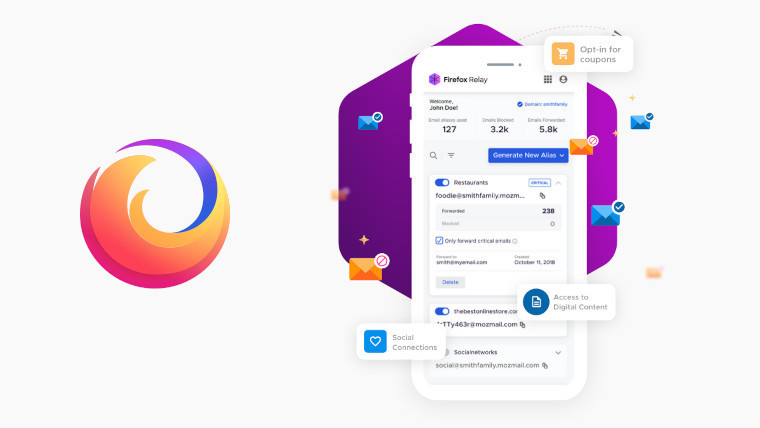 Mozilla has announced that it’s graduating Firefox Relay from beta. The service allows you to create relay email aliases that forward emails to your primary email address. This is a great service to have for those times when you don't want to hand over your primary email address because you suspect you'll receive lots of spam. With a relay in place, you can always switch off that address if you need to.

To mark the launch, a premium tier has been made available for those who need more relay addresses. To encourage its adoption, the premium tier carries a low introductory price of $0.99/€0.99/1.00 CHF per month. The premium service is available in Canada, the U.S., the UK, Malaysia, Singapore, New Zealand, Austria, Belgium, France, Germany, Ireland, the Netherlands, Spain, and Switzerland.

According to Mozilla, it heard from users during the beta phase that it would be cool if Firefox Relay provided more than five email aliases. To address these concerns, Mozilla decided to offer a premium service where subscribers receive one subdomain alias to create unlimited email aliases. With premium, you also get the option to use your email alias to reply to emails directly and customer support through a contact form.

Now that Firefox Relay is out of beta, it also supports more languages including Chinese, Dutch, French, English, German, Greek, Italian, Portuguese, Slovak, Spanish, Swedish, Ukrainian, and Welsh. Mozilla said it expanded the service to these languages to bring protection to even more people.

One of the most important priorities for Mozilla is privacy. With Firefox Relay, the alias addresses will forward emails to your primary email but Mozilla never reads or keeps any of the content that passes through its systems. As soon as the email has landed in your primary email inbox, the email is deleted from Mozilla’s servers.

One important limitation of Firefox Relay that you should be aware of is that there’s a restriction on the size of email attachments that it can handle of just 150 kb. If you find that emails you’re expecting aren’t reaching your inbox, it could be because the email carries an attachment with a size greater than 150 kb.

If you head over to the Firefox Relay website you can get started with the product right away. The webpage contains information about the free and premium tier as well as various use cases for when the service might come in handy. The service will require you to use a Firefox account but you’ll be given the opportunity to make one if you don’t yet have one.