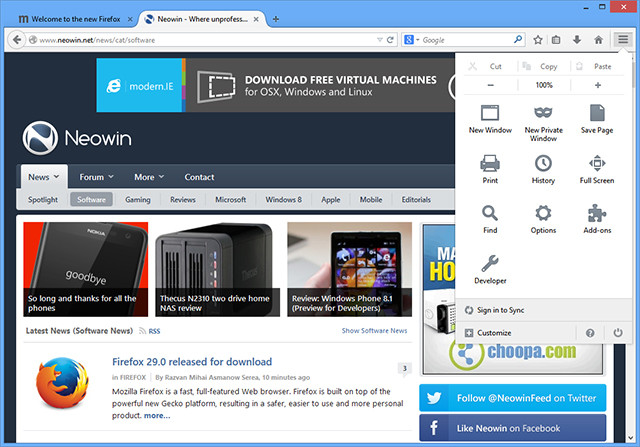 Plans to start making semi-silent upgrades default in Mozilla Firefox are underway and ready to become default with Firefox 30, which is expected to be released on June 10th.

On May 10th, a Mozilla engineering manager named Benjamin Smedberg, participated in a discussion where he mentioned that many users were unintentionally stuck on older insecure versions and would have liked to upgrade. Smedberg commented that "about 2% of Firefox profiles are getting "stuck" on older versions in each release cycle, at least back to Firefox 22."

Smedberg mentioned that user preference will be respected, so "if the user has updates completely disabled in preferences, [Firefox] will not prompt for updates at all." He continued on to detail that if the manual updates option is selected in a user's preferences, then Firefox "will nag but not force-install the update."

Firefox versions 11-26 will be targeted in a slightly different way-- an add-on with a hotfix for bug 994882 will be distributed instead. Two methods of deploying the update are currently being considered: the first involves silently downloading the update, and then prompting users with a UAC dialogue on the next launch. If the user clicks "yes." which most would automatically do, then the latest version of Firefox will open instead of the older one they were expecting. If the user clicks "no," the old Firefox will open as normal, however a tab will open asking if the user wants to use the new Firefox. Refusing it is not permanent, and the user will continue to be nagged to use the latest version of Firefox

The other method of deployment skips over the sneaky nature of the former, and instead just asks the user whether or not they want to update before downloading the latest version.

This latest revelation comes only days after Mozilla announced that Firefox will include DRM, which has a lot of users unhappy. How users will react to this is a new issue altogether, given that this may mean that Australis, the UI that was birthed in the face of very vocal protest, will be forced on all users.