Twitter announced last week that a redesign is on the way for Twitter.com. The popular social networking website, crammed into 140 characters, is currently rolling out the new design to some of its 145+ million users.

When you first visit the new Twitter, you will notice the new black toolbar across the top of your screen. This acts as shortcuts to your home screen, profile, messages and account. You will also be able to search Twitter for recent tweets, hashtags, and users right from the top toolbar. Just to the left of your account drop down, you'll notice a quick “create tweet” or “What's happening?” button, allowing you to tweet from anywhere on the website, at anytime.

Twitter has kept the old style feed system, with minor changes to it. You will still be able to save tweets from people you follow as a favourite, retweet it or reply by hovering over the tweet. There is also a new addition to your feed, an expansion button that shows you replies, tweets and detailed information about that person. Below all of this is other related tweets from that follower, and tweets from various people who recently used the same hashtag. 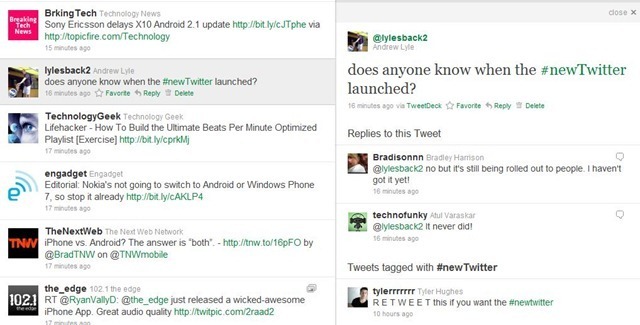 Some of the old sidebar has been located under “What's happening?”, including @mentions, retweets by others (reweets by people you follow), retweets by you and tweets of yours that have been retweeted by others. Beside that, is your saved searches and managing lists, a quick view of lists you've made and lists you follow.

While some of the sidebar was relocated, a new, bigger, and redesigned sidebar is taking its place. The brand new sidebar shows you the amount of tweets you've created, your latest tweet, followers, people following you, favourite tweets and lists that follow you.

Below your quick overview, is recent trend. Recent trends includes things that are currently popular in your region. This may include things you're currently interested in and breaking news from around the world. Beside trends is suggestions on who to follow. This feature was introduced into Twitter a little while back, but now it's more presentable and located on your sidebar. These suggestions are based on friends of friends, allowing you to see who one or more of your friends are following. 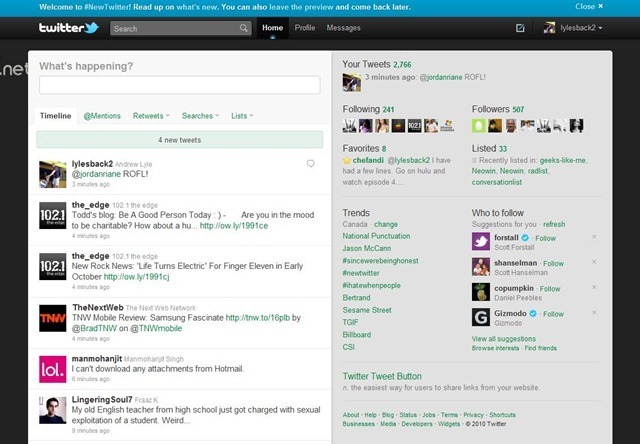 Your new profile is cross between your home page and old profile, showing how many tweets you have, people you're following, followers and how many lists you're a part of. This filtered feed will show all your recent posts, with the new expansion button to track your conversations with that associated tweet. Your recent messages are now presented in a treeview, condensing all your DM (direct messages) with that person.

There are also a lot of new additions to Twitter, including YouTube, Flickr, Vimeo, Twitpic and many more media companies all embedded into your tweets. The new addition will allow you to view photos and watch videos inside the expanded view of someone's tweet.

The new update is expected to take some time to reach everybody, but in the mean time, you can check out this video: